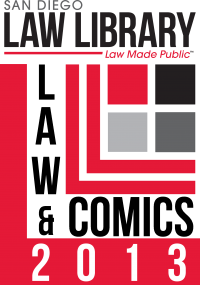 On July 16, 2013, from noon to 1:00 p.m., CBLDF Executive Director Charles Brownstein will be taking part in the San Diego Law Library’s Lindley Lecture on Law & Comics 2013, an annual event that coincides with Comic-Con International and examines legal issues related to comics. This year’s theme is Censorship: From 1950s Superheroes to Today’s Manga.

Brownstein will speak to what CBLDF knows best: the censorship of the comics medium, starting with the moral panic of the 1950s that almost lead to the demise of the medium to modern day attacks against Japanese manga. From the event page:

With moral panic on the rise, the history of how comics have been censored is more important than ever. Join us for this shocking tale, starting from the public book burnings and Senate hearings that led to the Comics Code Authority in the early 1950s, through the attacks on retailers in the 1970s and 80s, on artists in the 1990s, and on readers today. Learn about the latest developments affecting the freedom to read comics, including the details of recent prosecutions against comics readers in the United States and abroad.

The first 40 attendees will receive a free gift, and everyone who attends will be entered in a drawing for a chance to win a copy of Comic-Con: 40 Years of Artists, Writers, Fans and Friends and other prizes. Attorneys who attend will earn 1 hour of participatory MCLE credit. Seating is limited, so organizers recommend that you RSVP by calling 619-531-3900 or signing up at the event page. For more information, visit the San Diego Law Library’s website.