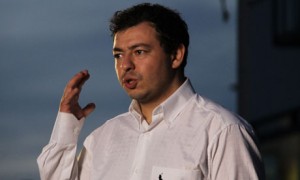 Seven years after Danish political activist Ahmad Akkari began protesting the caricatures of the Prophet Muhammad featured in Danish newspaper Jyllands-Posten, he has publicly renounced his former stance and apologized for the affects his protests had.

Akkari, a practicing Muslim, acknowledges that he feels his 2006 tour of Muslim countries that lead to protests against the cartoons was wrong. Along with a group of imams, Akkari traveled to Lebanon, Egypt, and Syria seeking support for their cause. The resulting protests sparked violent attacks against Danish missions in Syria, Iran, Afghanistan, and Lebanon that resulted in deaths.

The Guardian UK carried the story about Akkari’s rescission:

“I want to be clear today about the trip: it was totally wrong,” Akkari said… “At that time, I was so fascinated with this logical force in the Islamic mindset that I could not see the greater picture. I was convinced it was a fight for my faith, Islam.”

Akkari now believes that Jyllands-Posten had every right to print the drawings, although Islamic law forbids depictions of the prophet. Recently, Akkari apologized to Kurt Westergaard, one of the contributing artists to the cartoons, who received death threats and attempts on his life for his participation:

“I met a man who has converted from being an Islamist to become a humanist who understands the values of our society,” Westergaard said of Akkari. “To me, he is really sincere, convincing and strong in his views.”

Not everyone has accepted Akkari’s new point of view as graciously. His former colleagues in the Islamic Society of Denmark have said that his efforts are an attention-seeking device to put Akkari back in the public eye:

Group spokesman Bilal H Assaad declined to comment on Akari…but said: “It is still not okay to publish drawings of Muhammad. We have not changed our position.”