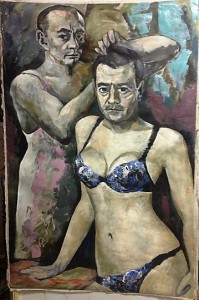 Russian authorities confiscated politically-charged paintings on Monday from a newly opened art gallery in St. Petersburg. As a result of the seizure, the artist fled the country and the exhibit was shut down.

The paintings — one of which depicts Russia’s President Vladmir Putin decked out in a negligee, caressing the hair of Prime Minister Dmitry Medvedev, who wears women’s underwear — were part of the inaugural exhibit called “The Rulers” at the Museum of Authority, which opened on August 15th. Painter  Konstantin Altunin, who has now fled to France seeking asylum. The museum, which founder Alexander Donskoi said was to “put on exhibits relating to various authorities,” had shown solidarity with Russia’s gay rights movement by offering free admission last weekend to anyone who said they were gay, lesbian, bisexual, or transgender at the door.

The new law, which many have critiqued as a violation of gay rights, fines people for distributing materials that depict “non-traditional sexual relations” to minors. In addition to possibly breaching this ban, the paintings may also be in violation of a law that forbids insulting state politicians and authorities, as well as another new law that criminalizes actions that “insult the religious feelings of the faithful.”

The museum posted warnings outside so minors wouldn’t enter, in addition to messages cautioning anyone with strong religious beliefs who might be offended. Regardless, Donskoi says the museum has been shut down by police and won’t reopen. The St. Petersburg branch of Russia’s Interior Ministry admitted to only collecting and sending the paintings off for analysis, “on the basis of which a procedural decision will be made,” according to a statement on their website.

The homosexual ban is being strongly critiqued in light of the upcoming Winter Olympics in Russia, where many gay athletes are not sure they’ll be safe. Non-Russian citizens who violate the law could receive a fine or up to 15 days of arrest, followed by deportation. Russia is unwilling to drop the ban for the Games — though they have banned all protests in Sochi, the city hosting the Olympics, for the duration of the event.

Many are critical of the laws that Russia has passed recently, especially in how they relate to free speech. These new laws silence LGBT people in Russia from combating prejudice or stereotypes, or even sharing their own personal experiences, if there is a chance a minor may overhear it in person, online, or through the media. Minors who are gay, bisexual, or questioning, have no easy access to answers or support they need — and some even end up tortured and humiliated for trying to seek out others.

If such laws existed in the United States, acclaimed graphic novels like Alison Bechdel’s Fun Home, Stuck in the Middle (edited by Ariel Schrag), and many, many more would never make it to shelves. If Russian authorities can confiscate paintings and shut down museums, then there is no hope for comics actually depicting LGBT lifestyles.

← Libraries Remind Parents of Responsibilities
Using Graphic Novels in Education: The Silence of Our Friends →