Thailand doesn’t skimp when it comes to censorship. According to a recent article by Brian Ashcraft at Kotaku, the country’s scrupulous censorship laws commonly disrupt the dubbed anime that is broadcast on Thai television. Whatever is deemed inappropriate — be it anime or not — has a hefty blur smudged over the offending material.

Thai censors will blur even the most innocuous images. So everything from bathing attire: 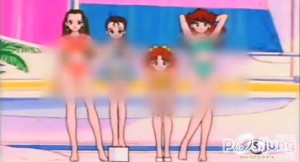 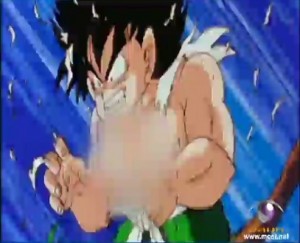 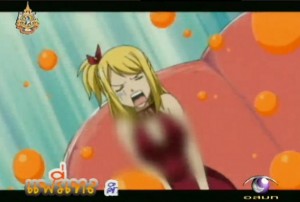 And clearly legal-age drinking get hit with a heavy blur: 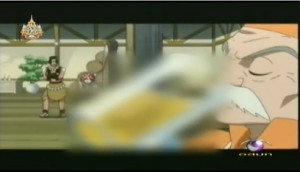 What seems most baffling is that other forms of media, such as religious or mythological artwork, are free from this censorship. The biggest no-no when it comes to speech or creative expression is in regards to Thailand’s monarch — any content that defames, threatens, insults, or is unflattering to the king is absolutely not allowed. You Tube was banned in 2007 for containing content unfriendly towards the king, and Google restricted more than 300 videos from appearing in Thailand in 2011. Thailand currently ranks 135 out of 179 in the Press Freedom Index — a sharp drop from being ranked 59th in 2004, though it is climbing back up the ranks. (You can read more about Thailand’s media restrictions here.)

Of course, Thailand isn’t the only country that restricts material found in manga and anime. U.S. censors have been complicit as well. CBLDF continues to fight the censorship of animated and drawn media from Japan. CBLDF’s Executive Director Charles Brownstein is currently in Japan on the Manga Freedom Speaking Tour, discussing censorship in manga and the fight for free expression in Japanese comics, both there and abroad. His tour will conclude on Sunday with a CBLDF exhibition of original manga creations at Comitia 105. Follow his adventures on the CBLDF tumblr and here at CBLDF.org!

Becca Hoekstra is a journalism student at City College of San Francisco. She thinks way too much about gender representation in media.