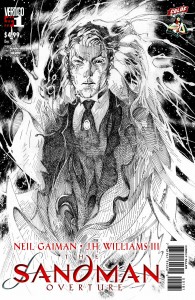 Comic Book Legal Defense Fund is proud to release the Jim Lee variant cover to THE SANDMAN: OVERTURE #1, drawn by DC Entertainment Co-Publisher and CBLDF Advisory Board member Jim Lee!  This cover is available exclusively to retailers who join the organization during CBLDF’s Retailer Membership drive running this month in Diamond Previews.

On October 30, 2013, The New York Times best-selling author Neil Gaiman returns to the world of The Endless with an all-new bimonthly comic book mini-series—THE SANDMAN: OVERTURE—published by Vertigo, an imprint of DC Entertainment. This is the story Gaiman has been wanting to tell since the very beginning. Joining Gaiman is artistic luminary J.H. Williams III, whose lush, widescreen images provide an epic scope for Morpheus’ origin story.

“It’s hard to believe it’s been almost ten years since Neil Gaiman first wrote to me about supporting the CBLDF,” said Jim Lee, DC Entertainment Co-Publisher. “Since answering that call it’s been an honor to work with him and our fellow creators to support their important work.  I’m thrilled to be able to collaborate with Neil on this SANDMAN cover as a way to say thank you to all the retailers who are joining the Fund this month.  Those membership donations make it possible for them to protect our rights.  I’m proud to be a part of it.”

Copies of this exclusive variant cover are ONLY AVAILABLE through the Diamond Previews membership drive.  Copies are available for retailers who sign up during the campaign, with additional copies available at higher membership levels.  To sign up as a retailer member or increase your participation, please contact your Diamond Customer Service Representative, or join on the Previews Final Order Cut-off list from 10-21 through 10-28.

Retailer Membership in CBLDF helps the organization protect the freedom to read, make, and sell comics.  This year’s incentives include:

The 2013 Retail Advocate will receive:

Incentive cover set with one copy of THE SANDMAN: OVERTURE #1 CBLDF Variant, with art by comics Superstar JIM LEE, and five copies of the CBLDF Comics Code Variant of MIGHTY AVENGERS #1. These covers are EXCLUSIVE to CBLDF member stores, and only available through this program.

The 2013 Retail Defender will receive the Retail Advocate package, but with TWO copies of THE SANDMAN: OVERTURE #1 CBLDF Variant, and ten copies of the CBLDF Comics Code Variant of MIGHTY AVENGERS #1. Stores joining at this level will also receive a “Banned Comics” Infographic Poster, and a CBLDF 2013 Member Hooded Sweatshirt.

The 2013 Retail Protector will receive the Retail Advocate package, but with five copies of THE SANDMAN: OVERTURE #1 CBLDF Variant, and fifteen copies of the CBLDF Comics Code Variant of MIGHTY AVENGERS #1. Stores joining at this level will also receive a “Banned Comics” Infographic Poster, a deluxe limited, signed and numbered ‘Liberty” letterpress print by Jaime Hernandez, and a CBLDF 2013 Member Hooded Sweatshirt.

The 2013 Retail Champion will receive the Retail Protector package, but with ten copies of THE SANDMAN: OVERTURE #1 CBLDF Variant, and twenty copies of the CBLDF Comics Code Variant of MIGHTY AVENGERS #1.