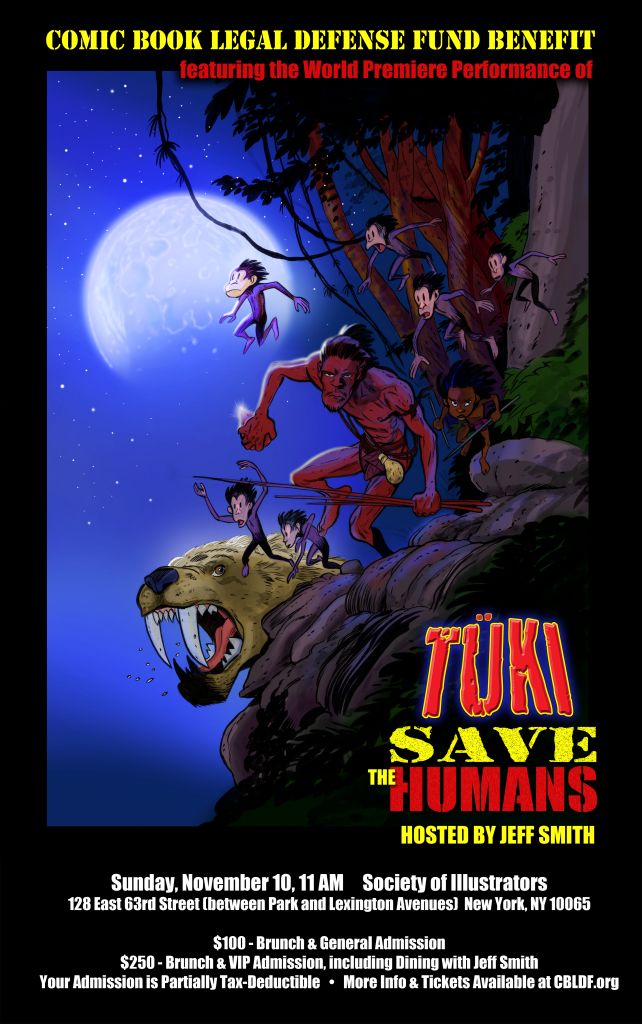 On November 10, legendary cartoonists Patrick McDonnell, Paul Pope, Liza Donnelly, Michael Maslin, and Larry Marder will attend a brunch hosted by Jeff Smith at the Society of Illustrators in New York City to benefit the Comic Book Legal Defense Fund’s Kids’ Right to Read program! This benefit brunch will boast a live performance by Smith, who will unveil his new series Tuki Save The Humans, as well as a silent auction and a private viewing of the Society’s current exhibits.  Tickets to this event are partially tax-deductible, and available at www.cbldf.org

CBLDF is a non-proﬁt organization that protects the freedom to read, create, and distribute comics by performing legal aid, education, and advocacy activities. Smith recently joined the Fund’s Board of Directors and will host this lively afternoon event, where attendees will also enjoy brunch with the most outstanding authors in contemporary graphic ﬁction and an auction of original art by today’s ﬁnest cartoonists.

Doors will open at 11:00 a.m., followed by viewing of the exhibits and silent auction. Smith’s performance will begin at 12:00 p.m., to be followed by brunch and viewing time in the Society’s galleries.

General Admission Tickets are available for a $100 donation to CBLDF and includes admission to the exhibits, brunch and a souvenir print signed by Jeff Smith. $40 of this contribution is tax-deductible.

Dine With Jeff Smith VIP Admission Tickets are available for a $250 donation to CBLDF. This includes dining with Jeff Smith and also includes admission to the exhibits, brunch, and a souvenir print signed by Smith. $190 of this contribution is tax-deductible.

Donors will enjoy three of the Society’s exhibits: The Original Art, a juried exhibit showcasing the original art from the year’s best children’s books; Battling Boy, a selection of original pages from Paul Pope’s extraordinary new graphic novel, and The Collection of Michael Maslin and Liza Donnelly, New Yorker cartoonists whose collection includes works by cartoon luminaries from the magazine’s past, such as James Thurber, Gluyas Williams, and Helen Hokinson, and its present, including Jack Ziegler, Roz Chast, Bob Mankoff, Mick Stevens, Drew Dernavich, Zachary Kanin, Barbara Smaller. Donnelly, Maslin, and Pope will all be on hand at the brunch to discuss their exhibits with attendees.

Your admission to brunch supports CBLDF’s important work protecting Kids’ Right to Read. CBLDF is a leader in opposing censorship and in support of a parent’s right to choose what content is suitable for his or her children. The Fund helps to keep books on shelves and empowers students to speak up for their rights. In the past year, CBLDF has helped protect dozens of books, from Marjane Satrapi’s Persepolis to Anne Frank’s The Diary of a Young Girl. CBLDF’s publications Raising A Reader and Using Graphic Novels in Education are vital tools in helping the next generation of teachers, librarians, and parents use comics to promote literacy. The Fund’s efforts to ﬁght censorship in courtrooms and classrooms are essential to protecting the future of comics. This brunch will advance that important work by raising money to support 2014 Kids’ Right to Read efforts.

About Jeff Smith
Jeff Smith (born February 27, 1960) is an American cartoonist, best known as the creator of the self-published comic book series BONE. Smith solidified the ‘90s’ Self-Publishing Movement when he joined other self-publishers and launched a new era of independent comics publishing, a movement that captured nearly 20% of the growing comics book market. In 1993, Smith breathed new life into the Graphic Novel format with The Complete BONE Adventures Volume One: Out From Boneville, which sold an unprecedented 50,000 copies in its first year. BONE won numerous American awards including 10 Eisner Awards and 11 Harveys, as well as European awards from Italy, Germany, and the French Alph Art.