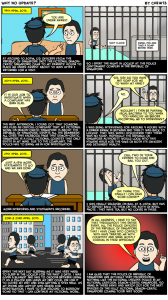 Cartoonists Rights Network International recently shared in interview between Malaysian cartoonist Zunar and Singaporean cartoonist Leslie Chew — both of whom have been arrested and persecuted in their home countries for their political cartoons. Zunar visited Singapore and interviewed Chew for the CRNI website.

Zunar was awarded the Cartoonists Rights Network International’s annual Award for Courage in Editorial Cartooning. Zunar, the pen name of Zulkiflee Anwar Ulhaque, was arrested and detained in 2010, hours before a collection of his new political cartoons was published. Despite being cleared of sedition charges, Zunar had to sue for the return of dozens of seized books and artwork. Further, Malaysian courts ruled the sedition arrest was lawful. Zunar appealed the latter decision, and a hearing was scheduled for September 30. The hearing has been moved back several times, and it could not be determined whether the hearing took place as scheduled at the time of this writing.

Leslie Chew was arrested by authorities for alleged racial insensitivity and sedition. Chew shares his comic, Demon-cratic Singopore, on Facebook, and his arrest was the result of a complaint filed by a private citizen who took issue with the content of some of Chew’s cartoons. The sedition charges were dropped, but Chew still faced contempt of court charges. The latter charges were dropped when Chew apologized “for scandalising the judiciary.” Chew further deleted the offending cartoons from his Facebook page.

Chew shared his feelings about the contempt charges, which might have led to two months imprisonment and a nearly $16,000 dollar fine:

Leslie said, “I think (the charge) is not fair. This is the first time they have any issue with these four comics. Surely a warning letter would suffice? Does it warrant dragging an ordinary citizen to court just because his point of view might not be the same as the authorities?”

Chew spoke with Zunar about his experience with the Singapore justice system:

“I was interrogated for over 30 hours and placed under island arrest for 3 months and have to report for bail extension 6 times during that period.” Leslie said, “and now that they have dropped the sedition charge, does it mean that what is stated in my comic is true? Had they made a wrongful arrest? If so, I’d expect the authorities to at least have the decency to apologize for all the inconvenience and distress they have caused me, my family and my friends. But sadly, this is Singapore, and common decency from them is probably the last thing anyone can expect.”

You can read the entirety of Zunar’s article for CRNI here.