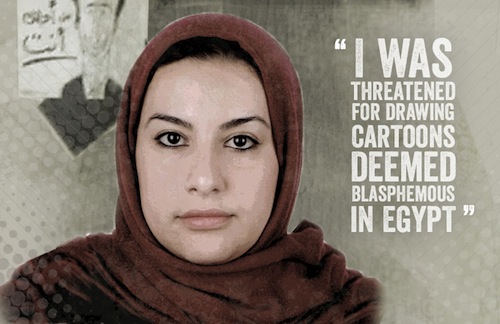 The last time we featured Egyptian political cartoonist Doaa Eladl here, she was facing a Muslim Brotherhood-backed lawsuit that alleged one of her cartoons was blasphemous. In the tumultuous months since then, the lawsuit evaporated along with Mohamed Morsi’s presidency — but that certainly does not mean Eladl’s critics have given up. As one of the few female cartoonists in the country, she has been both a key voice for women as the nation shapes its future and a prime target of fundamentalists who would much prefer that women remain silent. For her courage in the face of threats to her person as well as her work, Eladl was recently recognized by international free expression network IFEX as part of its Day to End Impunity.

According to IFEX, the goal of the Day to End Impunity is “to demand justice for those who have been targeted for exercising their right to freedom of expression.” In a blog post at Sampsonia Way, Eladl told the organization:

Explicit threats against me and the cartoons I publish on social networks are still being expressed and have even increased in ferocity. Such threats have become commonplace these days and are experienced by many journalists and cartoonists in these turbulent times in Egypt.

Also included in the Sampsonia Way post is a 20-minute interview of Eladl by American cartoonist Daryl Cagle, filmed while both were attending the International Festival of Caricature and Humorous Drawing in Saint-Just-le-Martel, France. In the video Eladl discusses the importance of political cartooning in Egypt and the rest of the Arab world, the specific cartoon that drew charges of blasphemy, her enduring optimism for the future of her country, and the other women cartoonists who have begun to follow in her footsteps there. But when Cagle calls her a hero, Eladl demurs: “I am not a hero at all. I just do what I believe and what I love, and I love Egypt so much. I believe the Egyptian people are suffering a lot, and they…deserve a good future, and I try to do all my best for my country.”

Check out the full interview below, and view some of Eladl’s work at Cartoon Movement.

← CBLDF Co-Signs Letter Defending The House of Spirits
Art Spiegelman Gets In the Spirit of Giving! →