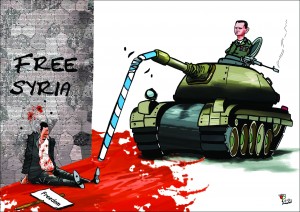 Palestinian cartoonist Fabi Abou Hassan has long courted the ire of the Assad regime in Syria due to his scathing cartoon criticism of the regime. In recent years, Abou Hassan has been detained, arrested, and threatened, so Cartoonists Rights Network International and International Cities of Refuge Network coordinated efforts to move Abou Hassan from Syria to Drøbak, Norway.

ICORN describes some of the dire threats Abou Hassan faced in Syria while exercising his freedom of expression:

Fadi Abou Hassan has faced threats to his safety in Syria for his cartoons in recent years, mainly from Syrian security forces and the government’s supporters. He was arrested already in 2009 and was detained under Emergency legislation for 80 days where he was tortured and otherwise ill-treated because of cartoons he published.

The situation of cartoonists in Syria became even more critical since the rebellion started in 2011. From 2011-2012, Abou Hassan was summoned to the Military Intelligence in Damascus on several occasions where he was threatened and banned from travelling. The direct reasons for the summoning were his cartoons depicting Assad and his forces, as well as other events related to the Syrian popular protests and ensuing conflict.

Abou Hassan is not the only cartoonist who has been persecuted in Syria. In the last few years, cartoonists have been brutally attacked, arrested, and possibly executed for challenging Assad’s government. Abou Hassan’s cartoons are frequently critical of Syria’s human rights record, the treatment of women in Syria, and political corruption. In late 2012, Abou Hassan illegally fled Syria, where he had been a refugee. Abou Hassan continues to cartoon, and many of his cartoons can be viewed on the Cartoon Movement website.