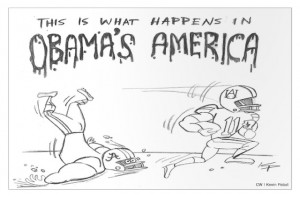 Sports fans all over the country were baffled over Auburn University’s recent defeat of the University of Alabama in the Iron Bowl. As a result, the University of Alabama’s student newspaper, The Crimson White, published a satirical cartoon depicting an Auburn football player trampling past an Alabama football player with the caption “This is What Happens in Obama’s America.” There was a public outcry that the cartoon had racist intentions, which caused the editorial staff to quickly issue an apology letter.

“The cartoon, in fact, was intended as a lighthearted look at some of the more absurd explanations given for Alabama’s collapse at the end of the Iron Bowl game against Auburn last Saturday. Many fans across the state took to social media and personal platforms to place blame for the team’s loss. To The Crimson White, and much of the student body, the blame was based on ridiculous and unfounded reasons.”

The cartoon is actually a nod to the popular “Thanks, Obama” internet meme. The sarcastic meme is poking fun at the country blaming all of its problems, especially trivial personal problems, on the President. These memes feature Obama being blamed for absurdities such as paper cuts and burnt toast. Unfortunately, the cartoon was taken out of context and criticized for being racist and insulting to the president.

The paper has promised to have stricter oversight on the cartoons they publish in the future. They have even put together a “sensitivity board” which will analyze the power and meaning behind their cartoons and determine if they need to be revised in order to not offend anyone. Ultimately, such a board could function as a censor or lead to self-censorship among contributors to The Crimson White.

← Knowledge Deleted: How a Louisiana Librarian Encouraged Teens to Make an Anti-Censorship Comic
Book Challenges on the Rise in 2013 →