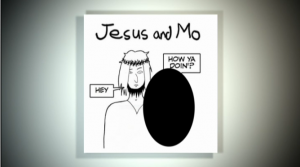 The censored image of Jesus and Mo, run by Channel 4 News

Earlier this month, Maajid Nawaz, the Liberal Democrat Prospective Parliamentary Candidate for Hampstead and Killburn in the UK, tweeted a Jesus and Mo comic strip, sparking a petition to deselect him from the running. Nawaz has also received death threats and graphic tweets in response to the cartoon, which some consider to violate Islamic practices against the depiction of Mohammed.

Jesus and Mo is a religious satire comic strip that features the characters Jesus, Mo, Moses, and The Barmaid. In the strip, Jesus and Mo are depicted as good friends who spend much of their time at a bar, drinking and commenting on various contemporary religios issues. The satirical strip has been praised by Salman Rushdie, Richard Dawkins, and many others.

The creator of the strip denies that Mo is a depiction of Mohammed, which is considered offensive by many Muslims. However, his response to the question is as irreverent as the comic:

Is that really the Prophet Mohammed?

No, it’s a body double. Mohammed couldn’t make it, as he has been dead for centuries.

The controversy began when Nawaz was a guest on BBC’s The Big Questions, where the comic was being debated. The BBC refused to display images from the comic, out of deference to a conservative interpretation of Sharia law. The censoring didn’t sit well with Nawaz, who proceeded to tweet the image with the message: “This is not offensive & I’m sure God is greater than to feel threatened by it.”

A former member of the Islamist revolutionary group Hizb ut-Tahrir, Nawaz is also the Executive Director of Quilliam, a counter-extremism group. He strives to promote democratic change in Pakistan. By challenging the BBC’s hypersensitivity, Nawaz opened himself up to criticism, scrutiny and potential violence. A petition began circulating, collecting just over 20,000 signatures, to end Nawaz’s candidacy. He also received death threats from Islamic activists via Twitter.

We are both Liberals and support the principle of freedom of speech. But we also understand the importance of respect for others’ views and of moderation of language. In so far as this second principle of moderate language has been breached in the heat and passion of the current debate, we regret this and call for all those who have differing views to ensure that any debate which continues on this subject should use language and attitudes which conform to Liberal standards of respect and moderation.

We now call on those on both sides of this argument to return to moderate debate, free of insult and threat and we do so because we believe this is in the interests of our Party, of the wider Muslim community in Britain and of the principles of peace to which Islam is committed.

The controversy has become so rampant, that the creator of Jesus and Mo responded to the controversy this week. In the January 29 strip, the creator took Nawaz’s critics to task, using BBC’s “Black Egg of Islamaphobia” to accuse Nawaz’s opponents of being Islamophobic. (You can view the cartoon here.)

The video of The Big Questions segment is embedded below. If the contentions nature of the discussion in the video is even slightly indicative of what Nawaz is facing, it’s obvious that he has quite a fight in front of him.

Casey Gilly is a Contributing Editor for CBLDF, a Staff Writer for Comic Book Resources and, most importantly, a cat enthusiast living in Oakland, CA.