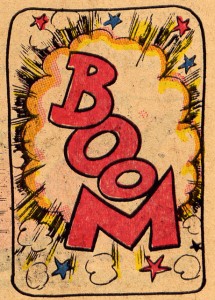 With publications like Raising a Reader! How Comics & Graphic Novels Can Help Your Kids Love To Read! and CBLDF Presents: Manga and our ongoing “Using Graphic Novels in Education” column, the Fund advocates for the use of comics to encourage literacy and reading. We’re not the only ones: The following article originally appeared on Teach.com on January 17, 2014. The article is an excerpt from Michael Strom’s graduate thesis Finding Comfort in Comics: Using Comic Books and Graphic Novels to Reach Struggling Male Readers. Strom is a graduate student at C.W. Post where he is pursuing his Masters of Science in Literacy.

Strom’s article focuses on male readers, who are generally more reluctant to read, but comics can be used to help all struggling readers and many of Strom’s ideas can be applied to students of all ages and gender identities. (Reprinted with permission of Teach.com.)

I don’t remember what it was about reading that got me hooked so young. Did I really enjoy it, or was I pressured into it from my mom? Either way, I didn’t fight it. Reading was the ultimate adventure, and I was the hero in that journey.

The structure of a hero’s journey is outlined in Joseph Campbell’s The Hero with a Thousand Faces. Campbell argues that the fundamental structure of a hero’s journey (or “monomyth”) is found in every work of fiction, every coming of age story, every comic, all following the same formula: “A hero ventures forth from the world of common day into a region of supernatural wonder: fabulous forces are there encountered and a decisive victory is won: the hero comes back from this mysterious adventure with the power to bestow boons on his fellow man.” The structure of the monomyth is found within all works of storytelling, from The Odyssey to Star Wars to Harry Potter. However, Campbell’s monomythic structure also defines the plight of the average struggling student.

While the label of struggling student is gender neutral, statistics show that boys are a great disadvantage compared to girls when it comes to reading (National Assessment of Education Progress, 2009; OECD, 2007; Watson, A., Kehler, M., Martino, W., 2010). According to the National Assessment of Education Progress, female high school seniors scored an average of 13 points higher in reading than their male counterparts. The notion of females dominating the world of literature is nothing new; the same report shows females outscoring their male counterparts in 2002, 1998, 1994, and 1992. Watson et al acknowledge this discrepancy, stating that curriculum needs to appeal to the “masculine” side of schools. They argue, “…if boys are naturally interested in sports, action, and technology and need to be given clear goals and feedback that will challenge them but also make them feel competent and in control…then to improve their achievement in literacy we simply need to cater to the way boys are hard-wired.”). In other words, in order to reach this demographic, we must use boys’ interests to our advantage.

I was a terrible math student. Not only did I not understand the subject matter (I come from a long line of “right-brain”ers), but I also just didn’t care about it. Math bored me. Why should I care about converting decimals into fractions? I couldn’t see the purpose of long division. I was apathetic toward the subject as a whole, except when it came to word problems. I loved reading word problems because I was able to draw pictures to solve them. I was the creative type growing up, and always jumped at the chance to showcase my skills across content areas. My love for art and reading helped me in math, allowing me to synthesize information that I couldn’t tackle on my own.

Bringing comic books and graphic novels into the classroom align with this idea of using student strengths to help across content areas. My creative skills helped me in math because I was able to solve problems in a visual way that made sense to me. Comics are similar in that they allow the same synthesis; they are a sequential art. For example, stories like The Avengers, though complex in plot, are easily accessible through the visual sequential nature of the genre. All comics and graphic novels follow a sequential formula, a formula that requires the reader to take ownership of their reading and follow plotline, dialogue, character development, and recurring themes in a layout that is unlike traditional classroom literature. Comics command readers to use multiple literacies (ability to read words, interpret images, connect words with images, and read sequentially) in order to understand the main focus of the text.

There is tremendous educational value to both comic books and graphic novels. When used to supplement core curriculum, this genre gets boys comfortable in literacy and allows them to become autonomous, strong, lifelong readers. And, while the traditional argument stands that comic books should only be used in English classes, a multitude of studies disagree. Comic books are grounded in the idea of sequential thought processes that are mirrored in areas of Science and Math. There are comics that are made specifically for these classroom subjects. Tatalovic’s article Science Comics as Tools for Science Education and Communication: A Brief, Exploratory Study provides a comprehensive list of comics that are aligned to different aspects of science. Examples include using Archie and Friends Battle Toxic Household Wastes to teach environmental and laboratory science, Omega Boy vs. Dr. Diabetes to teach about childhood diseases, and Martin Mystery at Milan’s Natural History Museum to teach about paleontology. There are also critically acclaimed texts that can be appropriately used in Social Studies classes, including Art Speigelman’s Maus that acts as an allegory for the Holocaust.

If we want to reach our struggling students, and promote literacy courage in young boys, we must use comics and graphic novels in the curriculum. We need to teach young boys that literacy still is the ultimate adventure, and they too have the chance to be the hero. Not only does it allow students to express their knowledge and comprehension through an alternative medium, but also it made students — particularly boys — more comfortable with literacy as a whole.

In Campbell’s monomyth, the hero comes from nothing. Along his quest, he grows and he changes. He meets new and strange friends who eventually change him for the better. The inclusion of graphic novels and comic books into school curriculum is an important part struggling boy readers’ journeys. Beginning from nothing, these young readers discover the equally entertaining and educational value of comic books and carry these skills with them throughout their journey. This genre aids the hero’s “quest” from struggling reader to skilled reader. All readers, regardless of gender, begin as an unproven hero. Excuse the cliché, but great readers aren’t born, they’re made. By bringing comic books and graphic novels into the classroom, we can work to make our students into the readers and heroes we know they can be.