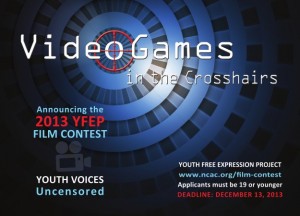 Each year, the National Coalition Against Censorship sponsors the Youth Free Expression Project Film Contest. This week, NCAC released the videos for the 10 semifinalists, which run a gamut of film styles but all make powerful statements against censorship of protected speech.

One of our favorite videos from last year profiled the censorship of the Mexican American Studies program in Tucson. This year’s theme, “Video Games in the Crosshairs,” could almost be a refrain here at CBLDF.org. CBLDF has long helped defend video games, in large part because the persecution of the medium so closely resembles the attacks against comics in the 1950s: specious scientific evidence, reactionary politics, and inflammatory rhetoric. If video games are censored, it isn’t so hard to imagine that the same might happen to comics books (again!). CBLDF’s amicus brief in Brown v. EMA was cited in the Supreme Court’s decision, which struck down a California law that would have regulated video game sales and effectively awarded the medium First Amendment protection.

The winners in the YFEP Film Contest will be announced on February 25. In the meantime, you can check out the work of some very creative — and very proactively opposed to censorship — youth here.