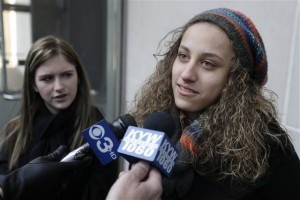 Free expression rights for public school students were resoundingly reaffirmed today, as the U.S. Supreme Court declined to hear a Pennsylvania school district’s argument that it could prohibit students from wearing breast cancer awareness bracelets that read “I ♥ boobies!” The court denied the appeal of B.H. v. Easton Area School District with no comment, meaning that a circuit court decision in favor of the students will likely be the final word in the case.

The saga began in 2010, when Easton middle school students Brianna Hawk and Kayla Martinez wore the bracelets — the sales of which benefit the Keep a Breast Foundation — to school during Breast Cancer Awareness Month. School administrators had previously issued a blanket ban on the bracelets and other “boobies” gear, claiming the word was “distracting and demeaning.” Hawk and Martinez were suspended, and their mothers joined with the ACLU of Pennsylvania to sue the school district. The case made its way through the district and circuit courts, each of which found that the bracelets did not cause a substantial disruption and the girls had a right to wear them in solidarity with family members affected by breast cancer and to raise awareness of the disease among their peers. Following the circuit court decision, the Easton school board voted 7-1 to appeal the case to the Supreme Court.

Easton’s justifications for banning the bracelets and disciplining the students have changed as the case proceeded through the court system. Initially, the district said that Hawk and Martinez were suspended for “disrespect, defiance and disruption.” When the girls sued, however, the school district told the court that the bracelets “violated the school’s dress-code policy and could be interpreted as lewd because they imparted a double-message about sex.” Before the case went to the Supreme Court, Easton’s attorney John Freund III grasped at yet another argument, claiming that “[t]hese kinds of cutesy appeals trivialize [cancer survivors’] experience.” Even if some people do interpret the bracelets that way, of course, it’s certainly no reason to curtail students’ First Amendment rights.

Now that the school district’s appeals are exhausted, the ACLU of Pennsylvania plans to ask a lower court to issue a permanent injunction ensuring that Easton students who wear the bracelets will not be disciplined. The Supreme Court’s silence on the matter will likely benefit students in other school districts who have also been barred from wearing the wristbands. Congratulations to Hawk, Martinez, and their families who have remained committed to this case for so long!