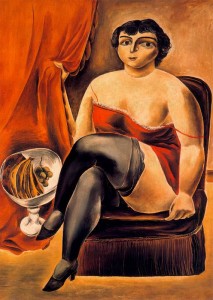 This week, we came across a very interesting art exhibit that recreates an exhibit that was censored in the late 1940s, around the same time that the backlash against comics was gathering steam in the U.S. Looking into the saga of Advancing American Art, the original exhibit organized by a cultural office within the federal Department of State, we couldn’t help but notice more striking similarities to the censorious fervor which only a few years later led to the founding of the Comics Code Authority and the virtual gutting of the comics industry.

One curator of the recreated exhibit, Art Interrupted, described the controversy over the earlier show as nothing less than “the first salvo in the culture wars.” Immediately following World War II, the State Department conceived of an internationally touring collection which would showcase diversity, innovation, and freedom of expression in modern American art. Diplomats especially wished to emphasize this last characteristic, which was supposed to contrast with the repression found in Latin American dictatorships, China, and the nascent Eastern Bloc. Ironically though, the assembly of 117 works by artists such as Georgia O’Keefe, Edward Hopper, Romare Bearden, and Max Weber soon raised an outcry from non-appreciators of modern art back home. Fueled by certain media outlets, which criticized the use of tax dollars to fund the project, Americans fiercely debated the worth of the art (not to mention the question of whether it was art at all) and wrote letters of protest to their Congressional representatives, forcing politicians to pick sides.

Besides the price tag (which was only $50,000 — shockingly low for such a collection even in 1946), complaints about Advancing American Art varied. Some critics were suspicious of left-leaning and “foreign-sounding” artists, while others felt that the dark tone of many works “failed to portray the nation as a thriving war victor.” All of these threads converged in Circus Girl Resting by Yasuo Kuniyoshi, which drew much of the media bombast. Although Kuniyoshi emigrated to the United States as a teenager in 1906 and was so patriotic that he created anti-Japanese propaganda art during World War II, his name alone was enough to raise suspicion for many Americans. On top of that, the painting’s style and subject were widely derided — all the way to the top:

[Circus Girl Resting] depicts a seated woman, scantily clad in thigh-high black stockings and a barely-there costume, one side of which has slipped so far down her shoulder, her breast is almost fully exposed. Her large eyes look unabashedly out at the viewer, and with a coy smile, she pulls back a curtain to reveal a small, fecund still-life of fruit in a bowl. The painting was the target of much ire, and elicited President Truman to blurt out at a press conference: ‘If that’s art, then I’m a Hottentot!’

The death knell for Advancing American Art apparently rang when Truman wrote a letter to Assistant Secretary of State William Benton, describing modern art as “merely the vaporings of a half-baked lazy people.” Within days the project was shut down, the curator fired, and the art stored until 1948, when it was auctioned as war surplus for a total of $5,000. Happily, much of the collection was purchased by museums at the University of Oklahoma, Auburn University, and the University of Georgia, which collaborated decades later on the reassembled exhibit Art Interrupted — currently on its final stop at Athens’ Georgia Museum of Art through April 20.

If the collapse of Advancing American Art was indeed the first salvo in the culture wars, then the fight over comics was one of the next. In 1948, when the modern art collection was sold for pennies on the dollar, American adults were also increasingly turning against the relatively new medium that so fascinated their children. Notorious anti-comics crusader Fredric Wertham published his first mainstream article about the supposed dangers of the format in May of that year, setting off a chain reaction that quickly spread through the popular press into households and classrooms across the country. By the end of the year, students from a handful of mostly-parochial schools had dutifully collected comics from their classmates to be incinerated in mass bonfires; in July, an early Comics Code (largely ignored by creators and publishers) was issued by the Association of Comics Magazine Publishers, a precursor to the Comics Magazine Association of America.

The backlash against comics shared many characteristics with the one against Advancing American Art. Like the artists chosen by the State Department, many Golden Age comics creators also came from immigrant backgrounds and bore names that sounded “funny” to white bread America — now-hallowed Jewish names like Eisner, Kurtzman, Siegel, Shuster, Feldstein, and Gaines. A barely-concealed undercurrent of antisemitism ran through much of the negative press about the industry, as when the Hartford Courant said comics were a “filthy stream that flows from the gold-plated sewers of New York.” Also like the Advancing artists, at least two of whom would later be investigated by the House Un-American Activities Committee, comics creators were accused of disseminating Communism and glorifying the darker side of American society through the wildly popular crime genre. Many mainstream American adults dismissed both modern art and the comics format as “low culture,” but comics were also indelibly associated with youth, making it that much easier for parents, lawmakers, and “experts” such as Wertham to bully the industry into a corner where it had no choice but to institute and (mostly) abide by a real Comics Code.

In 2014, many assume that we have moved on from the suspicion and xenophobia that killed Advancing American Art and wounded the comics industry. Without a doubt, the atmosphere has greatly improved for comics in general; until the past few decades, they were rarely even considered library-worthy. But still, in too many cases, would-be censors seem to consider comics (including graphic novels and manga) as not-quite-real-books that can be purged without the consideration given to an all-text novel. Xenophobia has largely been replaced by anti-LGBT bias. And while almost everyone now recognizes the risibility of 1940s and ‘50s claims that comics turned innocent children into violent criminals, that same argument is now leveled against video games. We’re hoping that the hindsight on Advancing American Art and its parallels to the anti-comics crusade can shed some light on the value of new art forms and the perils of dismissing them simply because one does not appreciate or understand them.