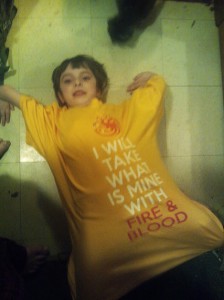 Any good citizen of Westeros knows that the night is dark and full of terrors — particularly if you’re part of House Bergen Community College in New Jersey, where simply posting photos of a “threatening” t-shirt can land you in the dungeon. This may sound like the plot of some terrible Game of Thrones fan fiction, but it’s the reality Professor Francis Schmidt is currently facing.

Schmidt was recently placed on mandatory leave and forced to complete a psychiatric evaluation after Jim Miller, an executive director at the college, believed that Schmidt sent him a threatening email. The threat in question was a photo of Schmidt’s daughter wearing a Game of Thrones t-shirt featuring a quote from the character Daenerys Targaryen — “I will take what is mine with fire and blood.”

Not to spoil the plot for those who are unfamiliar with either George R.R. Martin’s novels or the HBO series, but Daenerys is fighting to take back control of the kingdoms of Westeros with the help of an army and some fire-breathing dragons. The quote is actually a very noble statement about the character’s commitment to taking back the land and ruling with wisdom when so many have failed before her. I suppose that if a young woman actually wielding dragons looked you in the eyes and said this, it might feel pretty terrifying, but since this was simply on a t-shirt worn by a young child, it’s hard to imagine exactly how an educational administrator perceived it as a threat.

But in an astonishing display of First Amendment tomfoolery, administrators at Bergen took Miller’s concerns seriously. This past January, they required Schmidt to meet with a psychiatrist for evaluation before he was allowed to return to his job. The professor was not using this photo as a threat; it was simply part of his Google+ profile. The email Miller received wasn’t even directed toward him, as it was a standard Google+ email informing him that Schmidt had posted on the site. Either Miller isn’t a fan of the show or he has somehow missed the epic fandom associated with it, because he actually thought the t-shirt was stating Schmidt’s intentions to attack the school:

Unfortunately, they are apparently under the impression that Schmidt’s T-shirt is not an expression of his interest in the show, but of his intentions to shoot up the school. Inexplicably, Miller claimed that he believed the “fire” described in Daenerys’ quote “could be a kind of proxy for ‘AK-47s.'”

Schmidt believes the school is acting not to protect students from potential threats, but to retaliate against him. A week before being placed on leave, Schmidt filed a grievance against the school because he was passed up for a sabbatical.

Even though it’s now abundantly clear that the photo was in no way a threat, Bergen Community College is holding their position stronger than the Night’s Watch holds the Wall. Last Thursday, spokesman Larry Hlavenka Jr. gave an official statement on Schmidt’s suspension, somehow linking Schmidt’s child’s t-shirt to actual incidents of tragic violence.

“The referenced incident refers to a private personnel matter at Bergen Community College. Since January 1, 2014, 34 incidents of school shootings have occurred in the United States. In following its safety and security procedures, the college investigates all situations where a member of its community — students, faculty, staff or local residents — expresses a safety or security concern.”

While it’s true that administrations and faculty must be ever vigilant against legitimate threats to the safety of their environments, it’s hard to believe that anyone with common sense would look at Schmidt’s photo and infer a threat. Then again, censorship in any form rarely makes sense.

← 60 Years Ago Today: The US Senate Puts Comics on Trial!
Your Amazon Purchases Can Benefit CBLDF! →