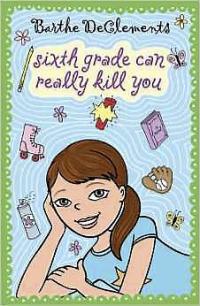 In an unqualified victory for the right to read, a book review committee in the Rosemount – Apple Valley – Eagan public school system in Minnesota has voted 10 – 0 to keep Barthe DeClements’s Sixth Grade Can Really Kill You in the district’s elementary school libraries.

CBLDF joined a coalition led by the National Coalition Against Censorship to defend the book. CBLDF joins coalition efforts like these to protect the freedom to read comics. Censorship manifests in many ways, and the unique visual nature of comics makes them more prone to censorship than other types of books. Taking an active stand against all instances of censorship curbs precedent that could adversely affect the rights upon which comics readers depend.

Parent Jenna Boutain filed a complaint against the book over the use of the word “retarded,” which she considers hurtful language. Her daughter had been given the book as part of an accelerated reader program in the district. The school offered to restrict access to the book for Boutain’s children, and Boutain agreed but she filed a request to remove it from elementary school libraries in the district anyway. The review committee met on May 14 to consider Boutain’s demand.

In their press release regarding the decision, officials at the school district shared the rationale behind the decision to keep the book:

In her testimony, Westview Elementary School Media Specialist Lauri Torseth reviewed the district’s criteria for the selection of library materials and the need to provide a variety of books to match the abilities and interests of many different students. She shared her thoughts about the value of the book in helping children who are having difficulty learning to read, like the book’s main character Helen does, and concluded that the book should not be removed from school libraries. Torseth also shared comments from a conversation she had with author Barthe DeClements, who said she wrote the book “to give people comfort that learning to read is hard.”

“The development of negative slang by youth is constant,” Torseth said. “The issue here is less about the choice of the word the author uses than the stigma of the word toward people with developmental disabilities.”

CBLDF applauds the review committee’s decision to uphold the right to read by keeping the book in district libraries!