Cartoonist (and frequent CBLDF supporter) Michael Kupperman took to the internet this week to decry the decision that The New York Times made in refusing to run his “See Something, Say Something” strip last Sunday.

The strip, which is written by David Rees, normally runs every other Sunday on the Week in Review editorial page in the paper. This week’s strip focused on #YesAllWomen, a Twitter hashtag that arose as a result of the Elliot Rodger shootings at the University of California, Santa Barbara on May 23. Kupperman explained the situation on his blog:

Some of you may have noticed that David Rees and I have been producing a comic for the New York Times Week in Review section called “See Something, Say Something” every other Sunday… but we’re not in today’s paper. That’s because they objected to David’s script this week and refused to consider printing it… the subject matter (male rage, online bullying & the hashtag #yesallwomen) was “too sensitive.”

Little more information is available as to why The New York Times felt the subject matter was “too sensitive,” but #YesAllWomen has been a lightning rod, generating both support and opposition. While the meme arose in the wake of the Rodger shootings, it is more a response to #NotAllMen, a hashtag that is frequently used to point out that not all men are violent or misogynistic. #NotAllMen is frequently criticized because many feel it feeds into the issues that #YesAllWomen addresses — the idea that even though not all men perpetrate it, all women face sexual harassment, both overt and covert. The back and forth has been vitriolic, and as we’ve seen even in comics, the internet has no shortage of people who are willing to take their opinions in extremely offensive directions. Rees and Kupperman’s strip is an indictment of that behavior.

Matt D. Wilson with Comics Alliance posited the following theory with regard to why the cartoon was cut:

Perhaps the abundant urine in the comic was the breaking point for the Times, but surely the paper knew what it was getting when it hired comics creators and humorists in the vein Rees and Kupperman. More likely, the paper wanted to avoid online hate and the certain flood of email they’d receive from men’s rights activists. MRA is categorized as a hate group by the Southern Poverty Law Center.

The New York Times, as a private entity, is within its rights to make editorial decisions about what it chooses to run in the paper. Kupperman expressed disappointment with the decision, but created and posted the strip anyway:

I disagree very strongly with that decision, because I feel David was making a point that deserves to be made. So I went ahead and completed the script as written; here it is, see for yourselves. 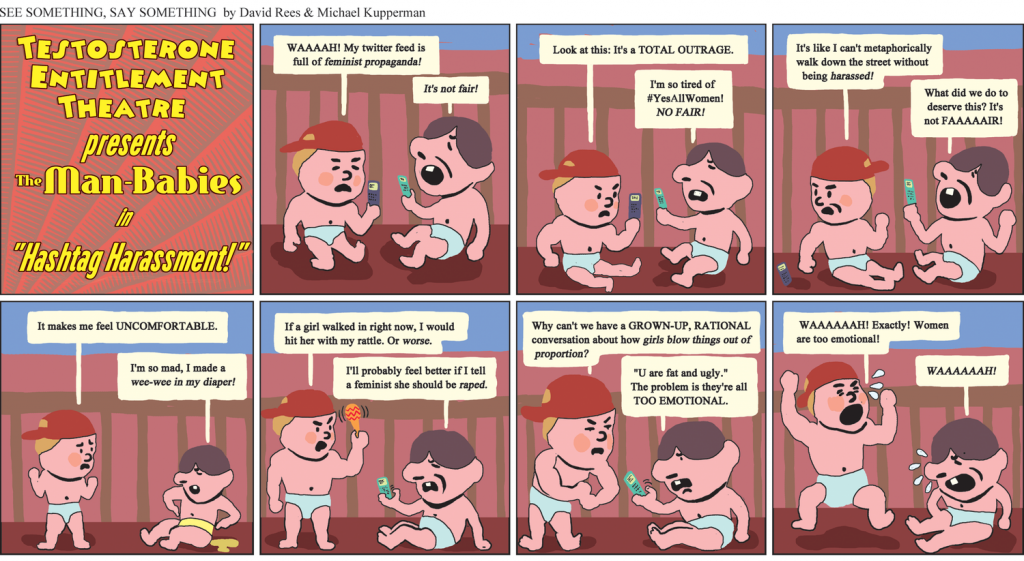 Is the subject matter of the strip “too sensitive”? That’s really up to the reader, but given the tenor of the current discourse, it seems like The New York Times missed an opportunity to participate in the conversation by refusing to run the strip. If Wilson’s conjecture is accurate, the paper certainly committed an act of self-censorship out of fear of reprisal. As disappointing as such an act may be, they’re within their rights to do so. Fortunately, Kupperman could express himself using the very tool — the internet — that his subject matter often utilizes.

← Political Cartoons for Peace
A Visit To Charles Vess’ Studio →