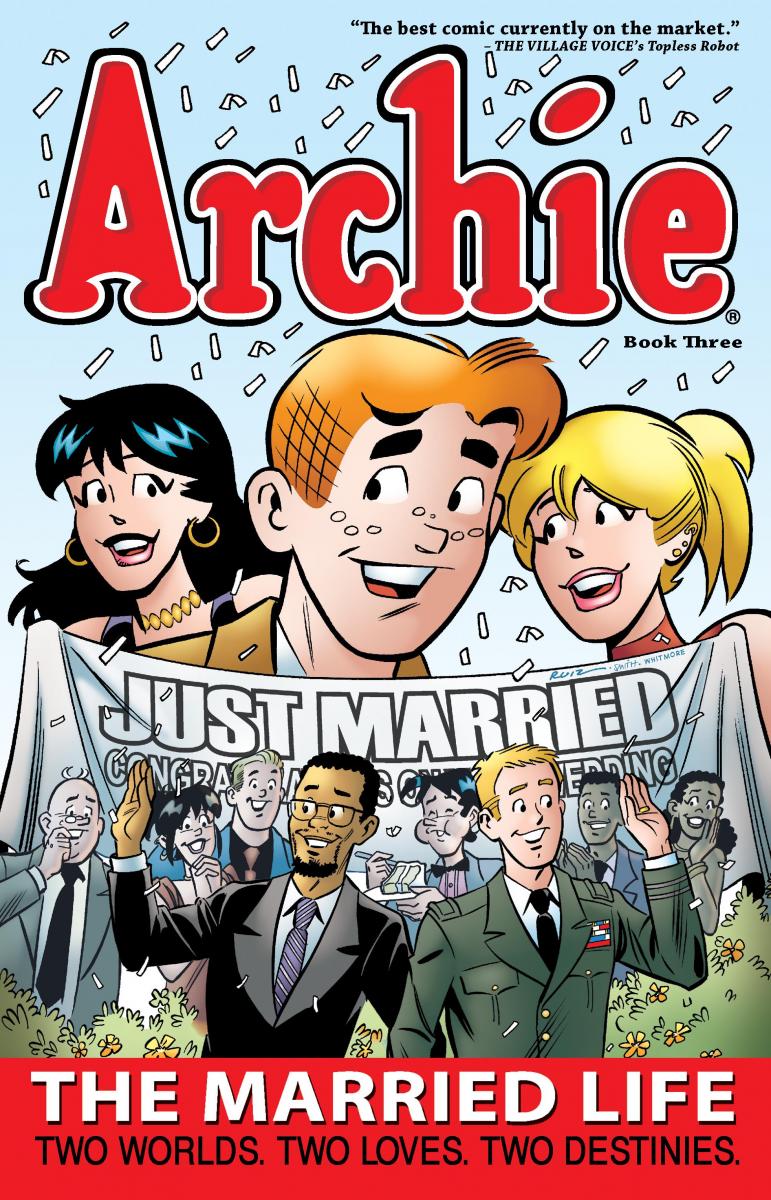 More bad news out of Singapore: in the wake of a ban on three children’s books featuring same-sex parents from the city-state’s libraries, today we learned that the government has also barred booksellers from importing Archie: The Married Life vol. 3, which features the wedding of gay character Kevin Keller. Many more books have likely been banned as well, but government officials refuse to provide a full forbidden list.

The latest ban was discovered last week by Singapore-based comic artist Sonny Liew, who most recently collaborated with Gene Luen Yang on The Shadow Hero. In light of reports about the three picture books that were removed from the national library system and are slated to be destroyed, Liew checked for the Archie collection in the catalog of Kinokuniya Books, a major bookseller in the region, out of curiosity as to whether retailers were also feeling the pressure to remove LGBT-themed titles. Finding that they offered every volume except the third, he contacted Kinokuniya and was told:

We regret that “Archie the Married Life 3″ is deemed to breach the Content Guidelines for Imported Publications, and removed from sale by notice of MDA. We are not able to sell this title.

MDA is Singapore’s Media Development Authority, which regulates books and all other media. The Content Guidelines for Imported Publications include four pages specifically on comics which could have been pulled directly from the Comics Code Authority. Alongside “hooliganism and gangsterism,” the comics guidelines also disallow “themes or depictions of alternative lifestyles or deviant sexual practices…e.g. homosexuality, group sex and sado-masochism.” Although some comics with more adult content can be sold with the label “Unsuitable for the Young,” the rules for that subset in regards to homosexuality are exactly the same–except for the concession that “depictions of alternative lifestyles or deviant sexual practices may be allowed if they are infrequent, non-explicit and only appear as a sub-plot.”

Contacted by the Straits Times today, the MDA confirmed that it “assessed the comic in March after receiving a complaint” and found it to be “not in line with social norms.” Oddly enough, the national library system still holds four copies of the book, all currently checked out. A National Library Board spokesperson said those copies were bought before the importation ban but “we will be reviewing the book in light of MDA’s decision” once they are returned. As Liew told Singapore newspaper The Independent, it seems likely that more books have been banned in response to complaints, but there is no easy way for the public to even know what they all are:

I’d long thought that there was public access to a list of banned media, given the reports you always see on titles or screenings being blocked by the MDA. It seems, however, that there is no such list available – we can only find out what’s restricted by asking about specific titles in an ad hoc manner.

Many of the citizen complaints that have prompted the NLB and MDA to reassess books are coming from members of anti-gay groups on Facebook, including one called “We are against Pinkdot in Singapore” in reference to an annual Pride rally. After last week’s ban of the three children’s books from libraries, an administrator of that group named Teo Kai Loon exhorted members to hunt down more:

Pls continue to scrutinize the catalogue and not allow such children books to go under the radar screen. You can always email NLB for that, the action is swift, all within 2 days. Remember, the onus lies on us.

When individual books are banned or challenged in the U.S. we often point out that plenty of other books with similar content were left alone, and ask facetiously if censors would remove all of those as well. Now that Teo Kai Loon and his ilk have discovered just how easy it is to regulate their fellow Singaporeans’ reading, it seems that is exactly what they intend to do. They’re just getting started; where will they stop?