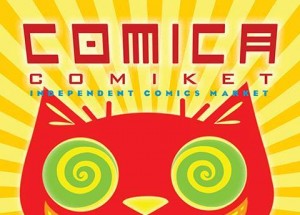 CBLDF’s Executive Director Charles Brownstein is in London this week to participate in the Comica Festival at the British Library.

CBLDF will be set up with a table at the Comica Comiket, a one day marketplace featuring the most forward looking publishers and creators of comics in the British scene.  We’ve brought a terrific assortment of items, including signed prints from Frank Miller, Paul Pope, Dave Gibbons, Eddie Campbell, plus signed copies of the Liberty anthology hardcover.  Entry is free.

On Sunday, Brownstein joins Tim Pilcher and Eric Von Gotha for “Sex, Censorship, and Sensibility,”  a panel examining lessons from past trials, bans and censorship of comics, and the threats to freedoms in publishing today.   Entry available for £5, £4 and £3.

← Gear Up for Sin City with Frank Miller Merch!
Pennsylvania School Board Rescinds Ban of The Handmaid’s Tale →