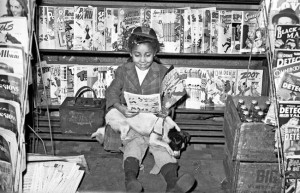 Recently, a story by Susie Rodarme of Book Riot came to our attention. In the piece, Rodarme reflects on her upbringing in a predominantly white town and a racist household. Rodarme was told by her father that “If you ever bring home a black man, I will kill you, kill him, and then kill myself.” Luckily for Rodarme, despite her homogenous landscape, she had access to a diverse group of people, ideas, and cultures — all through books — that would help her overcome the racist environment in which she was raised:

…books opened my eyes to things that I never would have worked out on my own. I read Roll of Thunder, Hear My Cry and found out that there were a lot of white folks who treated black people really badly. I got a little older and read Alice Walker, Ralph Eillison, Zora Neale Hurston, Langston Hughes, Lorraine Hansberry, Richard Wright. Reading their experiences offset the lies my father told me. These books proved that he lied.

Rodarme admits that reading alone has not solved her everyday ignorance, and she makes an important distinction that what it has done is help her develop empathy. “I’m able to see that, often, what I directly experience doesn’t reflect everyone’s reality. I’m able to see that my reality has blind spots and that I need to gain information through many different avenues.”

Rodarme’s short essay brings to light one of the more detrimental implications of social programming and how outside influences like literature can be considered crucial in escaping that kind of mindset. It’s just one of the reasons why students should have access to books — and graphic novels — that aim to do just that. And yet many of these same works of literature have been deemed inappropriate by some and encounter censorship. Because of the presence of violence, sexual content, depictions of racism, profanity, drug use, and other controversial topics in books, some worry about allowing students to have access to a number of books. This is unfortunate considering that the more important themes in these books are those to which students can relate or empathize.

Many titles offer historical perspective on racial issues. Kyle Baker’s Nat Turner illuminates the roots of America’s racist and abusive history towards African Americans. Turner’s story is a particularly violent one — so much so that it is recommended for more mature readers — but its violence serves a purpose. The treatment and enslavement of African Americans is a shameful stain in American history, and Turner’s response to enslavement and institutional racism with one of the bloodiest revolts of the time is still seen as controversial, but, as CBLDF contributor Meryl Jaffe points out, “It is a horrible, upsetting story, but one that must be told.” Though unpleasant, Baker’s book can offer students insight on the origins of racial tension in America that we unfortunately still face today.

Ho Che Anderson’s King, John Lewis, Andrew Aydin, and Nate Powell’s March: Book One, and Mark Long, Jim Demonakos, and Nate Powell’s The Silence of Our Friends are excellent guides to the Civil Rights Movement in America and the attempt to gain equal rights for African Americans through peaceful, non-violent means. The books provide historical perspective that informs how we perceive and respond to contemporary racial issues.

Gene Luen Yang’s American Born Chinese is a more contemporary look on how we view people of other cultural backgrounds and some of the harmful stereotyping we base off it. Unlike the graphic novels mentioned before, American Born Chinese looks at racism on a more personal level rather than a political one. The comic has been criticized for presenting a character — Chin-Kee — that is a shamelessly racist stereotype of a Chinese person. Yang uses stereotypes in the book as a means to examine American attitudes toward minorities:

Cousin Chin-Kee isn’t meant to be funny. He’s meant to come off the page and slap you in the face. If you’re laughing at him, I want you to do so with a knot in your stomach and a dry throat.

You see, Cousin Chin-Kee is no more my creation than the Monkey King. I yanked him, every last detail about him, straight out of American pop culture. One of his most over-the-top lines is a word-for-word quotation from a political cartoon by an
award-winning, nationally-syndicated cartoonist.

What’s most important about this story is that it is about characters attempting to assimilate into a society but are hindered by their physical appearances to do so and the perceptions of the people around them, something every young person can relate to.

Teenagers read millions of books every year. They read for entertainment and for education. They read because of school assignments and pop culture fads.

Throughout the article, Alexie explains how his own turbulent childhood was filled with physical and sexual abuse and how today he constantly meets teenage fans of his work who relate to the pain Alexie writes about and find solace in his work. He insists that the people who look to censor his book are looking to protect something else:

When some cultural critics fret about the “ever-more-appalling” YA books, they aren’t trying to protect African-American teens forced to walk through metal detectors on their way into school. Or Mexican-American teens enduring the culturally schizophrenic life of being American citizens and the children of illegal immigrants. Or Native American teens growing up on Third World reservations. Or poor white kids trying to survive the meth-hazed trailer parks….

Alexie concludes that to write “inappropriate” stories for the youth is to provide aid for them in times of distress:

This idea is in large part a reason why we can consider it ironic that Chicago Public Schools attempted to ban Marjane Satrapi’s memoir Persepolis. Though the backdrop of the graphic novel is a foreign one, taking place in Tehran during the Iranian Revolution and the Iran-Iraq War, students of the Chicago area can certainly identify with the violence Satrapi witnessed during the Revolution, especially considering the city’s struggle to combat the number of homicides that happen every year.

It’s no coincidence that the most relevant books are frequently the most controversial. Willfully imposing ignorance on students by censoring such books is truly irresponsible and hinders their ability to overcome negative social programming, to address contentious situations in their environments, and to become more complete and empathetic individuals.