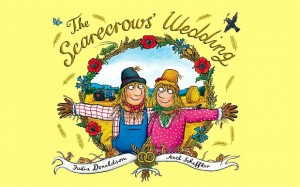 Last week, we reported on the controversy that erupted over Julia Donaldson and Axel Scheffler’s The Scarecrows’ Wedding, which depicts a smoking scarecrow. Donaldson and Scheffler are also the creative force behind The Gruffalo, one of the most beloved children’s series in the United Kingdom and a series that has found a significant following here in the United States. Despite the fact The Scarecrows’ Wedding portrays smoking in a negative light (scarecrows are highly flammable, after all), publisher Scholastic felt compelled to defend the book against a small cadre of very loud critics:

Our feeling, after much discussion, was that children will inevitably encounter smoking at some stage, as people continue to smoke outside in public places, and we hope that, by showing smoking in such a negative way, this book might give parents the opportunity to discuss the issue with their children, and reinforce the anti-smoking message.

UK Journalist Matt Zitron took to the Huffington Post to reiterate the point that Scholastic made in their statement. Zitron is parent to Zac, a 3-and-a-half year-old who loves to read. In his defense of the book Zitron speaks to in issue many parents face when raising a curious child: How does one explain the confusing images their children face each day? Zitron describes his experience with Zac’s questions about smoking:

If you walk down the street, you see people smoking. It’s the same here as in the US. Zac has asked about it on more than one occasion, and it’s again a complex issue. Yes smoking is bad for you and will make you ill, but why do people do it? With a three and a half year old there’s the obvious answer “some people are stupid” but essentially you need to illustrate as best you can the pitfalls. Now I’m not about to take a Clerks style line and show him a cancerous lung, and the Scarecrows’ Wedding does it fantastically.

Zitron also points out the obvious point that the book’s critics are missing:

Apart from the fact that Reginald Rake is portrayed as shady, it’s obvious from the moment smoking is mentioned it’s a bad thing. Betty O’Barley (the female lead) instantaneously points out that “smoking is bad for you!” (Probably as much they’re made out of wood, old clothes and straw; as the cancer). Rake’s attempts to look cool blowing smoke rings ends in him coughing and setting Betty alight. There’s no wriggle room here, there is not one second smoking is illustrated (both figuratively and literally) as a desirable thing to do.

As a parent, these three pages (yes folks, it’s three pages of the book) are an amazing tool for pre-schoolers. Often when we’re faced with “don’t do this” moments we’re answered with “but why?”, and here we have a great example to use.

Zitron’s essay is a valuable statement on how books can help kids deal with contradictory information, and a testament to how books can be used as teaching tools. Shielding kids from controversial images can hinder their ability to interact with a world that isn’t full of happy Gruffalos and non-smoking scarecrows.

You can read Zitron’s essay on the Huffington Post website here. Many thanks to Zitron for his recognition of CBLDF’s work on behalf of the right to read!