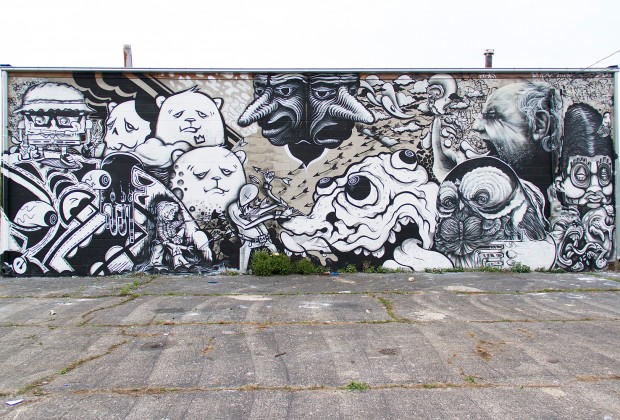 Mural near the University of Chicago, now painted over
Photo (c) Nabiha Khan

Everyone knows that art is not always pretty or positive. Its purpose often is to comment on the surrounding world, causing viewers to reflect on society and their own preconceived notions. But particularly in the United States it seems, disruptive art that makes its way out of museums and galleries and into the streets frequently receives a cold welcome. Recently at her blog Balance of Culture, public art specialist Linda Constant rounded up a few examples of art that was commissioned for public spaces, then faced resistance (including censorship in some cases) when the artists’ message did not meet expectations.

First there was the outdoor mural commissioned by the Los Angeles Museum of Contemporary Art in 2010. In conjunction with an exhibit on street art, the museum gave Italian artist Blu free rein to paint a large exterior wall on one of its buildings in central L.A. But when Blu took advantage of the location facing a Veterans Administration building to comment on the military-industrial complex–filling the wall with coffins draped in dollar bills rather than flags–MOCA director Jeffrey Deitch promptly had the piece whitewashed over. Deitch defensively told the Los Angeles Times that a look at his gallery website would show “I have supported protest art more than just about any other mainstream gallery in the country” but seemed oblivious to the irony when he followed that statement up by saying that there were no outside complaints about Blu’s mural “because I took care of it right away.”

More recently in California, a Glendale memorial to “comfort women” enslaved by the Japanese army during World War II was the target of a lawsuit from a Japanese American resident and the Orwellian-sounding Global Alliance for Historical Truth. The lawsuit demanded the removal of the memorial, a sculpture of a Korean woman sitting in a chair, because it took “a position at odds with the expressed position of the Japanese Government.” (Japan has resisted apologizing to the comfort women or even formally recognizing their existence.) Fortunately the city of Glendale recognized the lawsuit as “spurious” and a judge this month agreed that the Japanese government’s position is completely irrelevant to a U.S. public memorial. 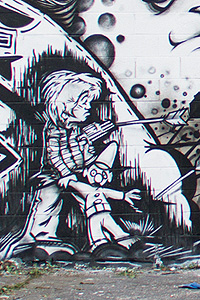 And finally there was another street art mural (shown above and at left), this one near the University of Chicago on the city’s South Side. This summer the university-associated Washington Park Arts Incubator commissioned Montreal artist collective En Masse to produce the mural in conjunction with local street artists and a youth group. The piece was only allowed to remain for a month, however, before it was quietly painted over without input from any of the artists involved. In a joint statement Chicago Alderman Pat Dowell and Arts Incubator founder Theaster Gates said that local residents had complained the mural included “negative images and gang symbols.” Perhaps most controversial was the portion of the mural contributed by street artist Zero, showing a young boy holding a doll (or perhaps a toy soldier?) in one hand and a gun in the other. Reached for comment by Chicago Magazine, Zero said it’s a toy gun and the boy is “a lost soul, wandering, not knowing what to do, hiding, and alone.” Many Chicago residents likely would recognize Zero’s piece as a comment on the city’s epidemic of gun violence and its effect on children, but we’ll never know since true community input was not sought before the mural disappeared. The Arts Incubator says the wall is now becoming a rotating exhibit space for various street artists, but in future “there will be community engagement in advance of the murals—not to veto the subject matter but to give the residents a sense of how it’s all put together.”

As Constant points out in her blog post, organizations like MOCA and the University of Chicago which claim to support free expression should not be surprised when artists they commission produce something controversial. In lieu of censoring public art, they would do a much greater service to the community if they also cultivated public conversation about art:

Instead of rushing into projects without proper research and preparation…perhaps we should view the idea of public art in a broader sense by allowing public works of art to fully come to fruition—not just sitting there for our eyes, but also instigating discourse that represents both our individual experiences and collective futures. Censorship, on the other hand, is precisely what takes the “public” out of public art.