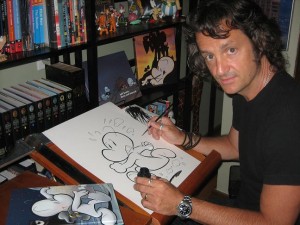 People have been trying to ban books for as long as books have existed, and attacks on comics are nothing new, of course. With their unique way of combining words and images, comics have long been misunderstood, and an easy target for the people who glimpse a panel or a page out of context and jump to the wrong conclusion. Through my work on the board of the Comic Book Legal Defense Fund, I’ve seen how comics still suffer under the mistaken notion that they must be simple, juvenile, and far from being an art form, consider them low-value speech.

Jeff Smith got Banned Books Week off to a roaring start as he pulled no punches in the blog he wrote for Reading Rainbow this week. Smith, the creator behind the acclaimed and award-winning Bone series, “earned” a spot on ALA’s most challenged books list earlier this year. Concurrently with some of the challenges that put Bone on ALA’s list, Smith joined the CBLDF Board of Directors in 2013 to help fight the censors who threaten comics and the freedom to read.

Smith’s advocacy for comics has shone as we celebrate the freedom to read during Banned Books Week. His blog for Reading Rainbow follows a conversation he had with Alison Flood at The Guardian and is in turn followed by a visit to NPR’s Morning Edition, where Smith joined Banned Books Week Chair Judith Platt and fellow most-challenged “honoree” Dav Pilkey, the creator of the frequently challenged series Captain Underpants. From NPR:

In closing his blog for Reading Rainbow, Smith describes his inspiration for fighting censorship:

Reading lets our imagination grow, and helps us find the paths that will inspire us for the rest of our lives. That kind of inspiration should never be taken away. But when a book is banned, that’s exactly what happens.

You can read Smith’s blog for Reading Raindbow here. For more on the Morning Edition report, visit NPR here.