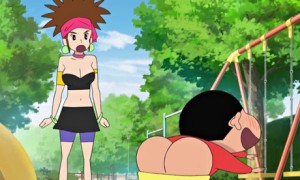 Television regulators in Indonesia have demanded that broadcasters to censor certain aspects of the globally known children’s show Crayon Shin-chan. The show has been popular in Japan for more than two decades, and focuses on a a precocious child who is fond of mooning and who often uses racy spoonerisms.

Despite the show’s popularity in Japan and abroad, some perceive the show as not ideal for children. It has been taken off the air in India over nudity and profanity and fell afoul of censors in South Korea and Vietnam. In this latest instance, Indonesian authorities are calling the show pornographic over images of the main characters bare buttocks and scantily clad female characters. Justin McCurry with The Guardian reports:

“The character fools around with his bare bottom exposed,” [commission member] Agatha Lily told Japan’s Asahi Shimbun newspaper. “He also noses around people [when they are] on dates. The show features a lot of female characters in seductive garments that emphasise their cleavage.

“It is essentially pornography.”

The Indonesian Broadcasting Commission alerted RCTI, the broadcasters of the show, of their decision on the show’s content. The broadcasting commission requested that RCTI either edit the content that they deem “essentially pornography” or to move the show to a later time. The commission has promised to stop the broadcast of the series if RCTI does not take action to censor the cartoon.

RCTI acknowledged the notions put forth by the broadcasting commission, but decided to not submit to officials. Further, the later time would remove the show from a child friendly timeslot, something the RCTI would prefer not to do. From The Asahi Shimbun:

“I don’t know why it’s not good,” the official said. “Maybe one of the episodes that aired weeks ago was the problem. We will continue airing it without change as usual.”

At least one source indicates that RCTI subsequently modified its anti-censorship stance and may entertain taking action to tone down the series, but we haven’t been able to find supporting articles. The Japan Times did note that RCTI received a similar complaint from the commission in 2011 and censored some parts of the series before airing it again. Whether RCTI stands by the series remains to be seen. We’ll post updates if more information becomes available.