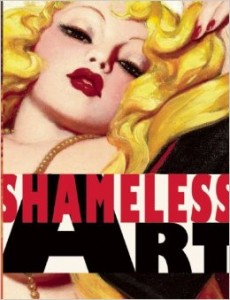 A Connecticut prisoner is suing the state after he was denied access to three art books and another on childbirth, all of which appear to meet the guidelines for books that should be allowed under a Department of Correction policy designed to bar pornography from prisons.

Dwight Pink Jr was convicted of murder along with six other charges in 2002 and is currently serving a 50-year sentence at the Cheshire Correctional Institution. Earlier this year he tried to have four books sent to him in prison: Atlas of Foreshortening: The Human Figure in Deep Perspective; Art Models 7: Dynamic Figures for the Visual Arts; Shameless Art: 20th Century Genre and the Artists that Defined It; and Gentle Birth Choices. Although a prison ban on books featuring “sexual activity or nudity” was instituted in 2011, all four of these books appear to fall into categories that are theoretically exempted from the ban: “materials which, taken as a whole, are literary, artistic, educational or scientific in nature.”

Former Connecticut Correction Commissioner Leo Arnone enacted the ban in 2011 “to improve the work environment for prison staffers, especially female staffers, who might be inadvertently exposed to pornography.” Regardless of Pink’s intended use for the four books, whatever that may be, they certainly are not pornography in and of themselves–even if sensational local news coverage says differently. Prison officials appear to be selectively enforcing the ban based on their perception of the recipient’s thoughts rather than the actual content of the books. If artistic and scientific books containing nudity are allowed for any prisoners–and Pink says in his lawsuit that they have been–then that standard should be fairly observed for all prisoners.

Pink’s case recalls another from California last year, when a court ruled that a prisoner should be allowed to access werewolf erotica. In that case prison officials’ fatal downfall was labeling the book “obscene” when it was nothing of the sort. Connecticut authorities have not claimed that the books denied to Pink are either obscene or pornographic, but according to state ACLU attorney David McGuire the Department of Correction will be expected to prove in court “that it has a legitimate penological reason to censor material and that it’s following its own policy, which says that items can’t be banned if [they] ‘taken as a whole, are literary, artistic, educational or scientific in nature.’ ” It will be interesting to see the contortions required to claim that any of the four books do not fall into at least one of those categories.

← Copyright as Censorship? A Look at the Early History of Copyright
Dave Gibbons, First Comics Laureate and Champion for Comics in Education →