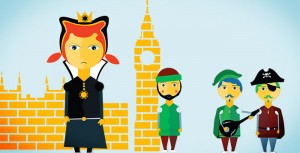 Fun fact: The concept of “copyright” was not originally created to protect creators’ rights to their content. Nor were early copyright laws implemented to propagate a free and healthy publishing industry meant to encourage new content to be produced. Rather, as the newest episode in Copy-me‘s webseries (Ep. 3: Early Copyright History) points outs, “copyright was designed primarily for censorship, control, and strict regulation.”

If this is the case, then who was copyright designed to protect and what were the laws intended to enforce?

It should come as little surprise that the concept of managing the rights to copies came about with the advent of the printing press in 16th century Europe. All of a sudden, instead of waiting for clerical scribes to hand copy individual books, authors could mass produce and distribute their works in a cheaper, more efficient manner. For authors, this virtually instant increase in exposure lead to a wider potential audience and additional patronage — the primary means by which authors received funding to supplement their literary careers. The printing press was, by far, the best thing to have come to the literary world, opening up new avenues for distribution, readership, public opinion, and commerce.

It was this opening of the market into the public sphere, though, where the trouble began. Books were quickly becoming a mainstream medium and an item that could be consumed by those other than the individuals who had the strong financial means and authority to control what books were being made and why. Authors were able to seek funding in unconventional, private places outside of the church and state, and this was taken as a direct threat by the individuals in power of these institutions.

For this primary reason, the first copyright laws were created. In some countries, mandates were instituted that forced closure of all public bookshops and enforced death by hanging for any person who used a non state-regulated printing press. In countries like England, though, rather than banning all bookshops and printing presses, Queen Mary initiated the less radical “crown-approved” printer guild who managed and regulated all forms of printing in the country.

In a world where “works of dissent and criticism were becoming just as circulated as the bible,” individuals in authority needed to curb the consumption of materials that they felt threatened the sociopolitical world that they created; according to those figures in authority, books were “poisoning people’s minds and souls.” As io9’s Lauren Davis writes, “English copyright law was actually based on systems designed to enable censorship and allow the government to control print works.” It was a time when the government had a literal monopoly over information — a time when materials were being circulated to the public, just not the ones that the crown and censorship bureau determined to be harmful to the public (and state).

In the eighteenth century, though, censorship rules and regulations relaxed (as they tend to do with time), and British Parliament discontinued the crown-funded printing guild. For those printers who were reliant upon the funding they once received from the state, the next logical step was to privatize printing. Thus came about a system that closely resembles modern publishing houses today. One major change that came with this privatized system was that authors were given the ownership rights to their works. Printers didn’t want nor necessarily need to control that part of the creative process anymore. When an author wanted to be published, they signed on with a specific printer. At that point rights to producing individual copies — “copy rights” — of the works were given to the printer in order to protect the exclusivity of copies that were distributed. Publishers owned and maintained the presses, and the books produced from those machines was the new source of their income.

Copyright may not be focused on controlling and censoring content anymore, but in the publishing world, though, new technologies bring new challenges. The internet and a prolific increase in independent self-publishing over this past decade has led to a lot of rethinking about how books can be produced and distributed. With the removal of the physical book and the ability to perpetually produce “copies,” the traditional definition of copyright has become a central part of a modern debate: In this day and age what is a “copy” and how are the rights of those (now) intangible objects maintained and managed?

In response to advances in e-reader and digital technology, the publishing world and its authors are quickly adapting and embracing ways to utilize and distribute different digital mediums. The print industry is evolving once again, and the conversation regarding copyright has been opened up. In a world where information is at a reader’s fingertips, this is a conversation of which all can now be aware and even participate. The discussions that are taking place now might impact the state of authorship and publishing in the future.

Copy-me collects a lot of information about topics such as copyright and digital information exchange. Visit the website to view “Early Copyright History” and learn about copyright’s early use as a tool for censorship.

We need your help to keep fighting for the right to read! Help support CBLDF’s important First Amendment work by visiting the Rewards Zone,making a donation, or becoming a member of CBLDF!