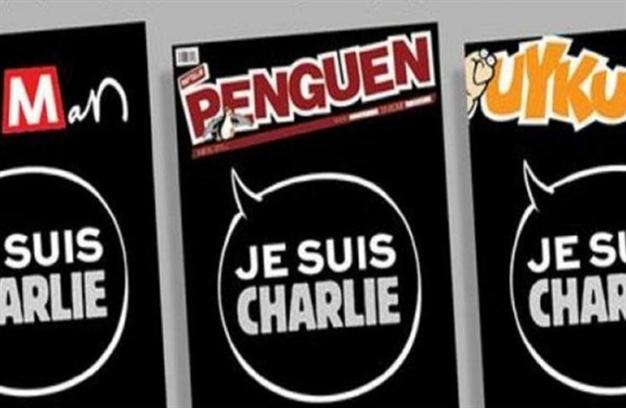 As anyone who follows our news coverage likely knows, France is certainly not the only country where cartoonists regularly face threats to their livelihoods and even their personal safety. In the week since the terrorist attack on Charlie Hebdo, the chilling effect from both extremists and government officials on cartoonists around the world has only intensified. At the same time, France and other European countries have also seen an equally troubling wave of attacks on mosques and Muslim individuals.

Early Sunday morning in Germany, the offices of regional newspaper Hamburger Morgenpost were firebombed. The paper had reprinted three Charlie Hebdo cartoons on Thursday, but editorial staff and German authorities warned against jumping to conclusions regarding a motive for this attack. Luckily, no one was hurt since the building was empty at the time, and fire damage was limited to two rooms. Police arrested two suspects who had been seen acting in “an unusual manner” around the time the fire started.

We hope that this solidarity will bring some consolation. We condemn the armed terrorism targeting the cartoons. We wish for a world ruled by a language of peace in which freedom of thought isn’t oppressed and the media isn’t attacked.

The magazines’ readers across the country reported difficulty finding copies of the special issues in newsstands, however, and the managing editor of Leman said staff were investigating whether “the distribution had been disrupted intentionally by certain distributors or other parties.” The Turkish magazines were already targets of extremists well before the Charlie Hebdo attack, but have received even more threats in recent days. One Twitter user, for instance, warned shortly after the Paris attack that “[t]he number of heads to be taken out in Leman magazine is more than 12.”

Meanwhile, the center-left Turkish newspaper Cumhuriyet was raided by police yesterday as it began distribution of a four-page special insert with content from this week’s issue of Charlie Hebdo. Authorities examined the insert and found no cartoons of Mohamed, so it was allowed to be distributed after a 40-minute delay. Later in the day, an opposition member of parliament pointedly asked of prime minister Ahmet Davutoğlu: “Did you give the order for the raid while you were marching for press freedom in Paris?” Although Cumhuriyet’s insert was grudgingly permitted, a Turkish court also ruled on Wednesday that the government could block websites showing Charlie Hebdo’s latest cover.

In Pakistan, the country’s leading cartoonist Sabir Nazar fears that extremists will be emboldened by the Charlie Hebdo attack and intensify the crackdown on Pakistani visual media, which he was already dealing with when we covered him back in June. This week, he told Voice of America that “[t]he extremists are afraid of visuals more than words and that means more trouble for music, theater, film and all visual arts in future.” He added that he has had to increase his production rate because most of the work he produces these days never sees print: “I make 40 cartoons instead of 30 because mostly my cartoons are censored.”

Back in France, regular Muslims have also suffered numerous attacks from fellow citizens who failed to differentiate between the terrorists and the Muslim population at large. To date, 60 attacks against mosques across the country have been reported, ranging from vandalism with spray paint and pig carcasses to the tossing of grenades and firebombs into the premises. On Tuesday, authorities finally increased police protection around mosques, as they had already done at other sites across France since the terrorist attacks began last week. In a speech before the National Assembly, Prime Minister Manuel Valls reaffirmed that “France is not at war with Islam or Muslims. France will protect, as it always has done, all of its citizens. Those who are believers and those who are not.”

In Germany, demonstrations against the “Islamization” of Europe, which had already been gathering steam in recent months, saw a surge in participation this week but were more than matched by counter-protests. On Tuesday in Berlin, chancellor Angela Merkel and president Joachim Gauck attended a Muslim-organized rally in solidarity with victims of the Paris terrorist attacks.