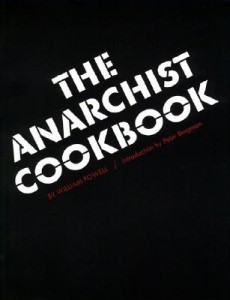 In a recent article for Harper’s Magazine, Gabriel Thompson took an in-depth look at the fascinating history of one of the most controversial books in recent memory: The Anarchist Cookbook by William Powell. The 1971 how-to manual for everything from bombs to drugs has tested the boundaries of free expression since its publication, but as Thompson shows the book has also taken on a life of its own, independent of an author who disowns but cannot suppress it.

In 1971 William Powell was a 19-year-old anti-war activist and bookstore clerk at the counterculture-friendly New York City chain Bookmasters. Unsurprisingly, he dealt with a lot of literature that wasn’t exactly mainstream–including underground comix, which he would hide during police raids, says Thompson:

When cops from the “Public Morals Division” showed up, looking for copies of Fuck You—A Magazine of the Arts or Robert Crumb’s Zap Comix #4, Powell quickly shoved them under the counter.

It was in the midst of this freewheeling environment that Powell struck upon the idea of writing a book that would ensure he’d never be sent to fight in Vietnam. He quit his job to concentrate full-time on compiling recipes to facilitate criminal activity. Although much of the drug information, obtained firsthand and from underground publications, turned out to be inaccurate, the recipes for bombs and explosives were mostly gathered from specialized sources in the stacks of the New York Public Library. A later FBI review judged that section of the book to be “accurate in most respects.”

After about 30 rejections from publishers, Powell finally sold The Anarchist Cookbook to a skillful huckster named Lyle Stuart, who embraced negative attention from the mainstream press and government agencies as free marketing. (Sharp-eyed readers will also recognize Stuart as the EC Comics business manager who supported Bill Gaines through the 1954 Senate hearings on comics and delinquency.) Powell, on the other hand, soon realized he was in over his head. As he became notorious through media reports and a government investigation, he also received direct threats by mail. Never really committed to violent anarchy in the first place, he drifted away from radical activities, earned a master’s degree in English, and embarked on a decades-long career of teaching emotionally troubled youth in the U.S. and abroad.

Unfortunately for Powell, he made the mistake of relinquishing the book’s copyright to Stuart in 1971. Since that time it has been transferred again, and while the author himself has come to believe that the cookbook is “a misguided and potentially dangerous publication, which should be taken out of print,” he is powerless to do that. Copies of the book turned up in the possession of several domestic terrorists throughout the ‘80s and ‘90s, but Powell the educator is most disturbed that it was found in the homes of several school shooters, including Columbine’s Eric Harris.

As Thompson points out in the Harper’s article, of course, the cookbook is only one element that may or may not have facilitated those attacks, and today even more information on building weapons and explosives is freely accessible online. Mainstream media sources have also frequently suggested that school shooters were inspired or enabled by video games, and we have refuted that just as often in these very pages. But Powell himself feels that his book certainly cannot have a positive effect on anyone’s thinking. Here the censorship debate collides with postmodern criticism: should the author’s changed intentions hold any sway, regardless of who holds the copyright, or does the book stand on its own? Read Thompson’s fascinating look at this moral dilemma here.

← CBLDF Celebrates Women By Supporting Their Work (And You Can Too!)
Denmark Debates the Inclusion of Muhammad Cartoons in Textbooks →