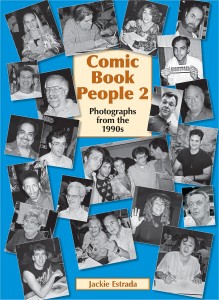 Hot on the heels of last year’s Comic Book People: Photographs from the 1970s and 1980s, industry mainstay and Eisner Award administrator Jackie Estrada is gearing up for Comic Book People 2: Photographs from the 1990s — but she needs your help to make it happen! Check out the Kickstarter campaign, ending this Friday. Among the 600 or so photos in the book will be some familiar faces from our very own CBLDF, as you can see here. Read more about the project in the press release:

The 1990s were a transitional era in comics: Image emerged, lots of other new publishers got into the mix, the direct market flourished, and the self-publishing and indie comics movements really took off. The number of comic conventions also increased all around the U.S. And Jackie Estrada was there, capturing the scene in candid images, hundreds of which will appear in Comic Book People 2: Photographs from the 1990s.

As a follow-up to last year’s well-received Comic Book People: Photographs from the 1970s and 1980s, longtime comics industry insider Jackie Estrada is running a Kickstarter campaign to fund the 1990s volume. As of March 2nd, the campaign was 60 percent funded, with just 10 days left to go. 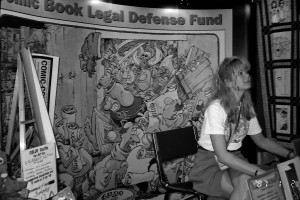 The high-quality hardcover coffeetable book will feature some 600 candid photos taken at comic conventions in the 1990s, along with commentary and anecdotes about each image. The book will be 176 pages, mostly with black-and-white images but including a 16-page color section. Estrada’s goal is to raise $23,000 to cover the costs of design, production, and printing of 2,000 copies, along with shipping, distribution, and backer rewards.

“The 1990s were a great time for new faces that are now familiar fixtures, such as Neil Gaiman, Grant Morrison, Jeff Smith, Terry Moore, Garth Ennis, Colleen Doran, David Lapham, and Paul Pope, says Estrada. “But even as these new creators came on the scene, a number of Golden and Silver Age greats were still with us, and I was fortunate to be able to photograph many of them,” says Estrada. Among the venerated artists who will be in the book are Frank Frazetta, Carmine Infantino, Gene Colan, Al Williamson, Sheldon Moldoff, Nick Cardy, and of course Will Eisner and Jack Kirby. 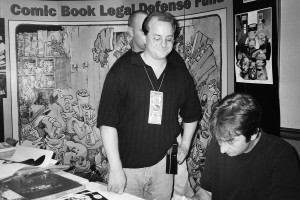 It was during the 1990s that Estrada and her husband Batton Lash formed Exhibit A Press to produce his comics series Wolff & Byrd, Counselors of the Macabre (aka Supernatural Law). Many of the photos in Comic Book People 2 were taken at shows where they exhibited, from the Chicago Comic-Con and WonderCon to the Small Press Expo and APE, as well as from the San Diego Comic-Con. The book will cover the full spectrum of creators, from mainstream superhero writers and artists to small press cartoonists, as well as people behind the scenes in the industry. Among the events of the 1990s to be featured are the foundings of Milestone and Friends of Lulu and highlights from ProCon in Oakland, California. 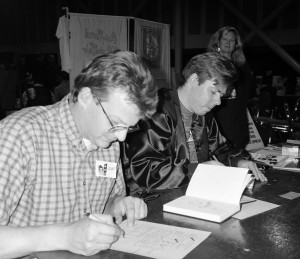 Guest artists Gerhard and Dave Sim in the CBLDF booth at APE 1995, with director Susan Alston looking on.

Jackie has been both a comics fan and a photographer since the 1960s, and she has been to every San Diego Comic-Con. Her involvement in comics has included editing publications for Comic-Con, serving as the administrator of the Will Eisner Comic Industry Awards since 1990, serving as president of Friends of Lulu, and being the co-publisher of Exhibit A Press, which will publish Comic Book People 2. Her photos of comics creators have appeared in numerous books and publications, from Paul Levitz’s 75 Years of DC Comics and Julius Schwartz’s autobiography Man of Two Worlds to Alter Ego and Comics Buyer’s Guide. Most prominently, dozens of her photos were used in Dark Horse’s Comics: Between the Panels and in Comic-Con: 40 Years of Artists, Writers, Fans, and Friends. Most recently, her photos could be seen in the PBS special on the history of superheroes.

The Kickstarter campaign can be found here: https://www.kickstarter.com/projects/1472315988/comic-book-people-2-photographs-from-the-1990s

We’re interested in seeing your photos of CBLDF booths past! If you have pictures of early CBLDF booths or events that you might be able to share and caption, please send them to CBLDF Executive Director Charles Brownstein (charles.brownstein@cbldf.org) and Editorial Director Betsy Gomez (betsy.gomez@cbldf.org)!