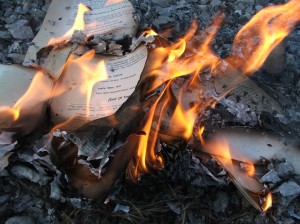 In light of the devastating news last week that Islamic State extremists apparently burned part or all of the public library collection in the Iraqi city of Mosul, CBLDF general counsel Robert Corn-Revere contributed a comprehensive overview of book burnings throughout history that was published on the Daily Beast. From the destruction of the great library of Alexandria up through Nazi book burnings and bonfires of comics in the U.S. shortly thereafter, Corn-Revere shows that the motivation remains the same: to “cleanse” society of whatever dangerous ideas were contained in the documents, and use the resulting blank slate to steer the culture towards the censors’ own preferred way of thinking.

The impulse to destroy cultural repositories began even before there were any books to be burned. Most of the documents lost in the ancient destruction of the Alexandria library were scrolls, and of course many of those were irreplaceable unique exemplars. The same was still true in Mosul; news sources have not been able to verify what may have been destroyed in IS-controlled Mosul, but the extremists themselves claim to have burned “more than 8,000 rare old books and manuscripts” along with newer (replaceable) portions of the library’s collection. Many of those rare texts were actually on loan from well-off local families who deposited their privately held collections in the library so that the general public could have access to its cultural heritage.

Up until just the last few centuries, Corn-Revere notes, it truly was possible for rulers or conquerors to stamp out dangerous ideas in a wide area by burning one library or all copies of one author’s books (and often the author along with them). In more recent years, however, the act has usually been symbolic. When Nazis burned books or Americans burned comics and other media like Beatles records or video games, they knew they couldn’t come close to destroying every copy in existence. That was no longer the point, says Corn-Revere:

Burning is a peculiar form of censorship in that the act itself is intended to send a message. This is why book burning is a public spectacle. It is designed to express outrage and contains within it the notion that the ideas contained in the books or other works of art should be obliterated entirely.

Luckily, since the advent of the printing press that obliteration has been increasingly difficult to achieve, although Corn-Revere does mention that the self-appointed 19th century arbiter of American morals Anthony Comstock managed to destroy 284,000 pounds of printing plates along with 15 tons of books over the course of his career. Today thanks in large part to the Internet, information flows more freely than ever before–but we still stand to lose a vital part of our cultural history whenever irreplaceable texts like the Mosul library’s are destroyed.