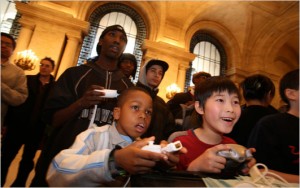 For over a decade now, video games have become one of the central figures in the continuing debate over what should be considered speech protected by the First Amendment, especially when it comes to speech consumed by children. In a recent episode of The Point on Gamespot, Violence, Censorship, and the Role of the Games Press, Danny O’Dwyer discusses not only the history of what has become one of the most controversial industries of the modern era, but also the history of the role that the press has played in shaping how the public views, discusses, and criticizes video games.

In this day and age, most people are familiar with the arguments made by some medical professionals, child protection groups, and even U.S. legislators that violent video games breed violent behavior, particularly in the case of maturing adolescents. Dr. Mehment Oz has publicly claimed that violent video games “harm young, developing brains by fueling aggressive behavior, dulling empathy and causing sleep problems;” and in 2013 President Obama made a call to initiate a $10 million research plan to uncover the link between adolescent violence and video games in light of the events at Sandy Hook — a research plan that never came to fruition and, in retrospect, appeared to be nothing more than an appeasement to then sensationalist media which initially fueled call to action. Much like the public persecution and ultimate censorship of comic books, comic creators, and the comics industry in the 1950s, video games as a media form, have become the modern-day scapegoat to explain away tough social issues pertaining to youths.

“Video games” as a singular entity have become an easy target. Coupled with little understanding of the industry itself and the rich diversity of games available and fueled with questionable research, allegorical “evidence,” and even the backing of celebrities, the gaming industry continues to be spotlighted by the press as one of the prime factors contributing to a rise in child violence today.

Perhaps, though, in the case of video games we have learned from the last time an industry was attacked and forced into censorship based on unfounded research to be more critical about what the media tells us. If we learned anything from Dr. Fredric Wertham’s crusade against the comics industry and the subsequent Senate Subcommittee Hearings of 1954, it is that we can’t just jump on the sensationalist media train and censor the things that we don’t like. This lesson is being put into practice today with many of the arguments being made against video games either being debunked or dismissed entirely. Recently, there have been studies that negate other studies that supposedly prove the negative effects of video games on children, and some parenting groups have taken the stand to use video games to foster conversations with their children about certain issues rather than blindly concluding that they need to ban video games so their children will be safe.

And yet, for every study that further proves the point that we all know, the video game industry continues to come under attack. Despite landmark Supreme Court cases like Brown v. EMA, which determined that a state legislature could not create new speech categories (in this case, violent speech) that fell outside of First Amendment protection and thus quashed attempts to regulate the consumption and distribution of video games in California, video games have remained the “controversial” whipping boy. Despite Justice Scalia’s majority opinion in Brown citing CBLDF’s amicus brief that described the similar media- and specious research-driven crusade against comics led by Wertham and the detrimental impact that crusade had on an industry as a whole, video games continue to be the ideal fodder for mainstream media coverage.

As O’Dweyer points out, legislators have made whole careers building cases against games like Grand Theft Auto, and countless anti-video game groups have been founded attempting to prove that video games are the bane of the modern world without taking the time to parse their arguments and identify that they are only speaking about a very small subsection of the industry itself. (We ran down several media and legislative attacks scapegoating video games in this post.)

For O’Dwyer, in many respects it was the sensationalist (and often misinformed) nature of the media coverage of games during the 1990s and today that has allowed negative perceptions of the gaming industry to persist. Video games are a hot topic, and to O’Dwyer “the world of games was under attack and being used by people to suit their own agenda” without anyone calling their attacks into question or looking more closely at their supporting evidence and research.

As O’Dwyer remarks, the industry and games press’ initial reaction to the controversy was to go onto talk shows to try to placate audiences who had already made up their minds about video games and didn’t want to hear the full story or acknowledge the faulty information they were being fed. O’Dwyer argues that this defensive tactic by the games press represented a period of inaction and allowed for the controversial nature of video games to grow. In fact, though, what O’Dwyer is calling “inaction” is exactly the same as when comic creators were asked to defend their work in front of the Senate — and America — in the 1950s. These were people who recognized the medium as a form of free speech but had an inadequate skill set for trying to explain and defend that concept to those who failed to recognize comics as protected by the First Amendment. The idea of protecting comics (and video games) was unprecedented, and in its defensive nature, it came across as something to be questioned and raised more suspicions about the medium itself. Why were these grown men and women defending something so vehemently that the media had “proven” was detrimental to children?

As media coverage and the internet got savvier and more diversified, though, so has the games press and how it currently handles discussion of video games in the larger global context. The games press is no longer relegated only to mainstream media sites that have the supposed upper hand in the argument. Now, there are whole portions of the press dedicated to covering video games as a serious industry, thus allowing the conversation about video games to evolve from one about them as a singular entity into a conversation about the idiosyncrasies of, differences among, and diversity of games that make the medium a more complex industry, one that is without a doubt protected by the First Amendment.

Although O’Dwyer claims that games press today is “guilty of being too reactionary,” that quick reactionary impulse that leads to press coverage on the numerous game related news sites has bled into the mainstream and is actively combating the grossly oversimplified accusations against video games to which the American public has become accustomed. As a fan and consumer of video games, O’Dwyer decided to become a voice that speaks out against the false claims that circulate within the pages of mainstream press and to be an authority who debunks unfounded research and demonstrates that the gaming industry is much more than the violence for which it is targeted. O’Dwyer asks, “Why was I apologizing for this obviously fantastic world of creativity?” acknowledging what was ultimately decided in Brown: that video games are a form of creative expression that is protected by the First Amendment. He also recognizes that the games press and portrayal of video games in the media influences the perception of the industry.

← The Best Books to Make the Worst of National That Sucks Day
Celebrate Children’s Book Week Throughout May with Kids Comics Blog Tour! →