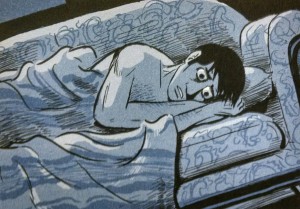 If you’re the kind of optimist that can’t help but eke out a grin, even on historically terrible April 15th, it may be time for you to procrastinate on your income taxes just a few hours longer and crack open these truly blue titles that remind the reader that That Sucks Day isn’t just about the anniversary of terrible things (the sinking of the Titanic, to name one), but that misery is a constant.

Asterios Polyp Reminds Us That School Prepares Us For Life, Which Also Sucks

Asterios Polyp has been many things: A theoretical architect, professor, author, husband. But when the story begins with a fire destroying everything that was tangibly his, Asterios is left to search for the identity of a man who has spent his life building only ideas.  Telling the parallel stories of a man that seemingly has everything and the same man with very obviously nothing, Asterios Polyp has and ending with an equally shaking force as its start.

The Sculptor Reminds Us That Life Sucks, Then You Die.

In Scott McCloud’s newest graphic novel, David Smith finds himself desperate enough to end his own life in 200 days if it means reaching artistic fulfillment. But is that long enough for him to realize there may be more to art (and life) than achieving fame? David’s life is not the only one hanging in the balance, as each character must face their own mortality in one way or another. The fact that he is not the only person in the book who’s entire family is dead emphasizes the fragility of life. The constant reminder of impending demise aside, you know a title is going to have its ups and downs and farther downs when the main character is most often referred to as “The Sad Man.”

Youth is Wasted Reminds Us That Sorrow Spares No One

Noah Van Sciver’s selection of mini comics pulls to the surface the ever present anxiety that plagues all of our lives, no matter how far separated we are from each other. I have never connected to an Insane Clown Posse listening house painter before this collection. (Empathy aside, I am still very much creeped out by that character.)  And while I have never resided in an anarcho-punk dystopian future like the one built for his strip “Punks Vs Lizards,” I can say with confidence that it seems really stressful.  If you’re left wanting more of Van Sciver’s work, I recommend his biography The Hypo: The Melancholic Young Lincoln.  Lincoln who died, by the way, on April 15th.

Spider-Man Blue Reminds Us That It’s Better to Have Loved and Lost. Right?

Peter Parker records the story of how he fell in love with Gwen Stacy, and how she fell in love with him even while he couldn’t see it. So why is a story of young love, teenage obliviousness, and super-villain beat downs on a list of books to read to make you feel blue? Because this appropriately named title is a post mortem message to Gwen, beginning at the top of the Brooklyn Bridge.  Even at its happiest peaks, you can’t shake the saudade that comes with flipping through a photograph book, which is exactly how Spider-Man Blue reads.

Bob Fingerman’s Minimum Wage ended with c-habitation bliss, or so we thought.  When the series picked back up in 2014 Rob was 25, (almost) divorced, and living with his mother. The six issue series deals with online dating, a sinking career, and the struggles of New York City realty proving that the second half of your twenties isn’t so different from the first.

Check out what other melancholic premiums the CBLDF offers our donors from our Rewards Zone.

← Humble and Last Gasp Partner for the HUMBLE UNDERGROUND BOOK BUNDLE, Benefitting CBLDF!
Is the Games Press to Blame in Video Game Persecution? →