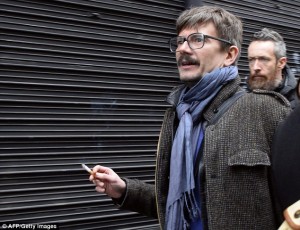 The fallout from the January attack on Charlie Hebdo continues, as surviving cartoonist Luz confirmed this week that he plans to leave the publication in September. The news comes in the midst of a public dispute among staff over the future direction of the magazine, which has seen a dramatic financial rebound since the attack.

In an interview with Libération, Luz (given name Renald Luzier) said his decision to leave was not directly related to the infighting, but more to an overall atmosphere of stress and psychological trauma. As one of the only surviving cartoonists of a publication that runs on cartoons, he says he finds the burden too much to bear:

Each issue is torture because the others are gone. Spending sleepless nights summoning the dead, wondering what Charb, Cabu, Honoré, Tignous would have done is exhausting.

Luz drew the defiant cover for the “survivors’ issue” of Charlie Hebdo which ran a week after the attacks, showing Mohammed holding a “je suis Charlie” sign under the headline “All is Forgiven.” Last month, however, he said he likely would not draw the Prophet again because doing so no longer interested him.

Also last month, 15 out of 20 Charlie Hebdo staff members, including Luz, published a joint editorial in Le Monde, calling for their magazine to become a cooperative with all staffers as equal shareholders. Currently the ownership is divided between the parents of late editor/publisher Charb with a 40% share, the cartoonist and new publisher Riss (Laurent Sourisseau) with another 40%, and CFO Eric Portheault with 20%. In Le Monde, staff expressed concern that the magazine’s newfound wealth might lead to mismanagement on the part of the owners.

Staff writer Zineb El Rhazoui, who also contributed to the editorial in Le Monde, was semi-publicly called on the carpet by management last week for unspecified “incidents.” Although the warning was formally characterized as a prelude to El Rhazoui’s dismissal from her job, Riss downplayed the possibility that she would actually be fired. Nevertheless, El Rhazoui said she was “shocked and appalled that a management that has received so much support after the January attacks could show so little support for one of its employees, who is under pressure like everyone in the team and has faced threats.”

Indeed, all of the Charlie Hebdo staff members continue to live under round-the-clock police protection and several have said they find it next to impossible to concentrate on their work, or even to sleep. The use of the January attacks to justify a sweeping surveillance bill currently being rushed through the French parliament, a scenario reminiscent of the USA PATRIOT Act passage after 9/11, also has not helped their morale as it represents precisely the direction that they did not want the country to take in the aftermath of their colleagues’ deaths. As the effects of the attack continue to reverberate months later, only time will tell if Charlie Hebdo survives after all.