Amulet is an award-winning graphic novel series about Emily and her brother Navin who, through extenuating circumstances, find themselves battling for the freedom of a parallel world and face mounting dangers with newfound friends. This coming-of-age series continues to win awards. The Young Adult Library services Association named it one of Best Books for Young Adults in 2009. In 2010, it won a Rhode Island Children’s Book Award and was included in a Library Journal list of “Graphic Novels for Reluctant Readers.” In 2011, it received a Young Reader’s Choice Award, and in 2013, it was ranked fourth on Goodreads’ “Best Graphic Novels for Children” list. These books received an Eisner nomination and are currently New York Times bestsellers. There are currently six volumes in the Amulet series.

Bone tells of three creatures known as the Bones, who are outcast from their home village of Boneville and lost in a human land called the Valley. In the Valley, the Bones find themselves surrounded by talking bugs, vicious rat-like monsters, magic, and the occasional dragon. Smith’s epic follows Fone Bone and his two cousins, Smiley and Phoney, as they meet the valley’s denizens, become embroiled in their society, and discover their own heroism in confrontation with the rat creatures and their mystical master, the Lord of Locusts.

Although considered a modern comics classic that’s delighted millions of readers all over the world, Jeff Smith’s Bone is also one of the most commonly challenged books in American libraries. There are nine books in the Bone series, as well as a prequel Rose. 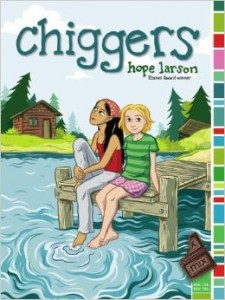 Chiggers is graphic novel that takes an honest look at the timeless ritual of summer camp as seen and experienced first-hand by Abby, a young teen attending her last year as a camper at sleep-away camp. Chiggers is a Junior Library Guild Selection and YALSA Great Graphic Novel for Teens Nominee. It follows Abby from the moment her parents rush her out of the house and drive her through country highways and hills to get her to camp before any other campers arrive and concludes when her parents are the first car in line on the last day of camp to take her home. It’s a story about friendship, fitting in, love, and loyalty, and it interweaves realities and fantasies of summer life.

In April, the American Library Association released its list of the most frequently challenged books in America in 2014, and three graphic novels were listed, including Drama which has been challenged for its “sexually explicit content.”

• What Do We Know About the Frequently Challenged Comics of 2014?