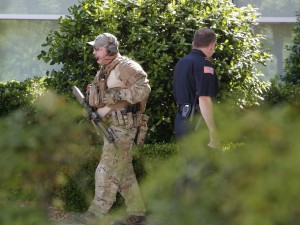 Two gunmen were shot and killed by police on Sunday after they opened fire on security guards at a Muhammad cartoon contest and exhibit in the Dallas suburb of Garland, Texas. The event was organized by conservative firebrand Pamela Geller and featured the anti-immigration Dutch politician Geert Wilders as keynote speaker.

Police were not releasing many details as of Sunday night, but the city of Garland’s Facebook page carried a statement saying that one security officer at the heavily-patrolled event was shot in the leg before other officers returned fire, killing the two assailants. Local news station WFAA reported that police were also searching the area for a vehicle that may contain explosives.

Although Geller has frequently invoked the January attack on the staff of Charlie Hebdo as support for her campaign against jihad in the United States, she and the secular leftists of the French satirical magazine make strange bedfellows to say the least. On Sunday evening Geller took to Twitter, saying the latest attack was part of a larger “war on free speech.”

We will have more on this story as it develops!