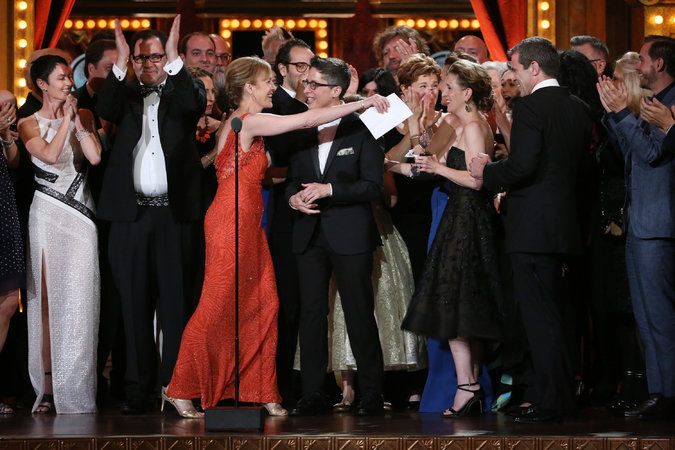 The Broadway musical based on Alison Bechdel’s graphic novel Fun Home won five Tony Awards including Best Musical on Sunday night, continuing a string of successes that contradict the opposition the book has met in some quarters such as the South Carolina legislature.

Last year, some South Carolina lawmakers proposed punitive budget cuts against the College of Charleston because it incorporated Fun Home into a voluntary summer reading program for incoming freshman. The proposed state budget would have cut CofC’s funding by $52,000, the exact amount needed for the annual The College Reads program. After months of debate, the legislature ultimately settled on a “compromise”: Instead of cutting the funds, they passed a budget provision that doesn’t cut funding but — in an act of irony so classic that it should be included in the dictionary — mandated that the money be used for teaching about founding documents including the Constitution.

Prior to the South Carolina debacle, Fun Home also faced challenges in 2006 at the public library in Marshall, Missouri, where it was ultimately retained after the library drew up a strong collection development policy, and in 2008 at the University of Utah, which provided an alternate assignment for the only student who objected to the book, but dismissed a petition from an outside group called No More Pornography.

In the past year, Bechdel and her work have passed a series of momentous milestones, including a Pulitzer nomination for the musical and a $625,000 MacArthur “genius grant” for Bechdel herself. Undeterred by the controversy in neighboring South Carolina, Duke University this year selected Fun Home as its Common Experience summer reading book for incoming freshmen. When it was first published in 2006, the graphic novel also won an Eisner Award and was included on several major “best of the year” lists. Although Bechdel says she has trouble judging the book and play objectively, she wryly texted the Washington Post’s comics writer Michael Cavna on Sunday after the Tony wins that “I guess finally I must accept that Fun Home has struck some kind of nerve.”