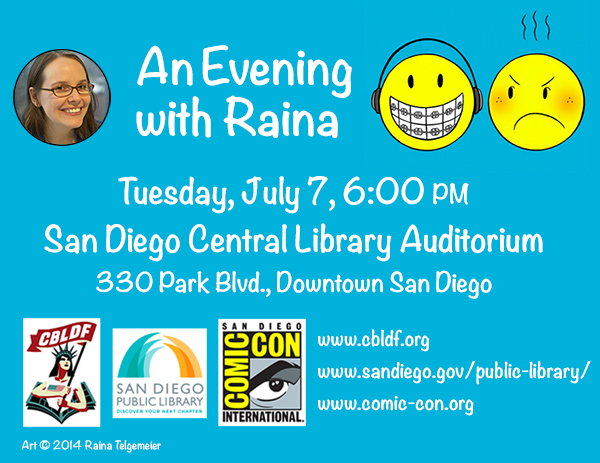 Raina Telgemeier, the best-selling author of Smile, Sisters, and Drama is coming to the San Diego Central Library, in downtown San Diego, on Tuesday, July 7 at 6:00 PM for “An Evening With Raina,” a free event to help you get ready for Comic-Con International!  Raina’s all-ages graphic novels have delighted readers of all ages! Come hear her speak about her work, bring your questions, and find out what’s next at this free special event presented by Comic-Con International and Comic Book Legal Defense Fund, in conjunction with the San Diego Public Library.

Raina is a global phenomenon! Her three books, Smile, Drama, and Sisters — along with her four books based on Ann M. Martin’s The Baby-sitters Club — total a staggering 3 million copies in print, placing her at the forefront of the children’s graphic novel boom. Her efforts to champion kids’ right to read include speaking out for Banned Books Week, the annual celebration of the freedom to read. Banned Books Week 2015 celebrates Young Adult books, and the rights of young readers everywhere to read fearlessly!

This popular comics creator is a special guest at Comic-Con International this year, but you don’t have to have a badge to see her in this special early appearance at the San Diego Central Library! “An Evening with Raina” is co-sponsored by Comic-Con and the Comic Book Legal Defense Fund, on Tuesday, July 7 at 6:00 PM in the Auditorium, located at 330 Park Blvd., in downtown San Diego. Admission is free, but seating is limited for this special event. CBLDF will have books available for donations.

About Comic Book Legal Defense Fund
Comic Book Legal Defense Fund is a non-profit organization protecting the freedom to read comics! Our work protects readers, creators, librarians, retailers, publishers, and educators who face the threat of censorship. We monitor legislation and challenge laws that would limit the First Amendment. We create resources that promote understanding of comics and the rights our community is guaranteed. Every day we publish news and information about censorship events as they happen. We are partners in the Kids’ Right to Read Project and Banned Books Week. Our expert legal team is available at a moment’s notice to respond to First Amendment emergencies. CBLDF is a lean organization that works hard to protect the rights that our community depends on. For more information, visit www.cbldf.org

About Comic-Con International
Comic-Con International (CCI) is a nonprofit educational organization dedicated to creating awareness of, and appreciation for, comics and related popular artforms, primarily through the presentation of conventions and events that celebrate the historic and ongoing contribution of comics to art and culture. In addition to its San Diego convention each summer (the world’s largest comics convention of its kind), CCI organizes WonderCon each spring. On the web: Comic-Con.org, Facebook.com/comiccon, Twitter.com/comic_con

← Statewide Reading Program Prompts Discussion of LGBTQ Censorship
“I Am A Champion for My Kids”: Teacher Battles Burdensome Notification Policy →