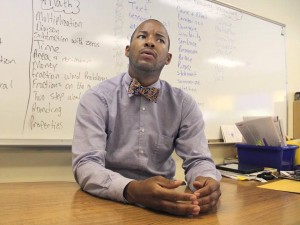 The North Carolina third-grade teacher who came under fire from some parents for reading the picture book King & King to his class is continuing to forcefully protest the suggestion that he should provide advance notice before sharing age-appropriate LGBTQ-themed materials with his students. In an interview with the Raleigh News & Observer last week, Omar Currie said “we should be ashamed of ourselves for even considering…that we should be doing that because a minority of people find it offensive.”

Currie, who is gay himself, borrowed the book from the assistant principal at Efland-Cheeks Elementary School in the town of Efland, where he is in his second year of teaching. His goal was to quash other students’ bullying of a boy in his class who acts “a little feminine” — and it worked, Currie told the News & Observer. Moreover, the school’s literacy specialist said that the boy who had been bullied seemed reassured “for the first time that he was okay just the way he was.”

After two successive public meetings to address challenges to the book, a review committee decided it was appropriate but also added the requirement that teachers must notify parents of every book that will be read in the classroom. Currie says that requirement is burdensome, since he reads his students around 500 books in a 180-day school year. Moreover, he objects to the notion that the fairy-tale style King and King is uniquely controversial. In the video interview, he said:

I was told that it’s controversial, which means that all LGBTQ families are controversial…. If you’re directing me to that [notification] policy based off of King and King, then you’re directing every single teacher to that policy when they read any book that reflects that population…. I was told that I should send home notice for that. How insulting it is for those families. How insulting! And we should be ashamed of ourselves for even considering the fact that we should be doing that because a minority of people find it offensive.

Some parents have brought up the familiar “homosexual agenda” accusation, pointing to a workshop on “disrupt[ing] the heteronormative culture of a classroom and…schools” that Currie and Assistant Principal Meg Goodhand led at a recent LGBTQ conference. Currie bristled at the suggestion that he is advancing a self-interested agenda rather than ensuring that all students are accepted in his classroom:

Kudos to Currie on standing up for all his students, and to the many colleagues and parents who came to the second review committee meeting to show their support! Check out his interview at the News & Observer website.

← Get Ready for Comic-Con with Raina Telgemeier at the San Diego Central Library!
RETAILERS: Stock up on Punks: The Comic Book – CBLDF Special, FOCs TODAY! →