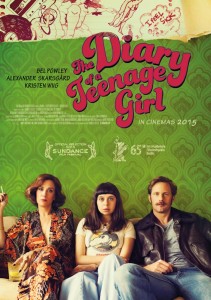 Next week, a critically praised film adaptation of Phoebe Gloeckner’s graphic novel The Diary of a Teenage Girl will land in U.S. cinemas with an R rating for “strong sexual content including dialogue, graphic nudity, drug use, language and drinking-all involving teens.” But across the pond, teens the same age as 15-year-old protagonist Minnie will be legally barred from seeing the movie in theaters thanks to an 18+ rating assigned by the British Board of Film Classification.

To be sure, Gloeckner’s story–which she has acknowledged to be at least semi-autobiographical–does not shy away from taboo subject matter as it centers on Minnie’s sexual relationship with her mother’s 35-year-old boyfriend. But director Marielle Heller points out that other films focusing on sexual awakenings of teen boys rather than girls have received the more permissive 15+ rating. Like the MPAA in the U.S., the BBFC is a non-governmental industry-funded organization, but cinemas wishing to disregard its ratings must seek permission from local authorities.

Heller and representatives from production company Vertigo Releasing have claimed that the 18 rating was imposed by an all-male classification board, but BBFC says that is not the case. In a statement they added that “the sex scenes and references are too numerous and sustained for a 15 classification to have been defensible.” The official rationale for the rating says the movie contains “strong sex scenes [that] include mechanical thrusting, breast and buttock nudity, and implied oral sex.” However, the only frontal nudity in the film is in a non-sexual context, which according to the BBFC’s own guidelines should not contribute to nudging the rating up from 15 to 18.

After Vertigo and Heller’s appeal of the rating was denied, the production company released a statement:

We are massively disappointed with this final ruling. The film explores female sexuality with boldness and honesty in an un-exploitative manner. In an age where young women are still continually being sexualized and objectified we feel The Diary of a Teenage Girl sends a very positive, reassuring message to young girls about female sexuality and body image.

The movie opens in both the U.S. and the U.K. next Friday, August 7.