Today, CBLDF joined a Kids’ Right to Read-led coalition to defend two children’s books being challenged in Duval County, Florida, over concerns that the books promote Islam and are critical of the US’s role in the Middle East. 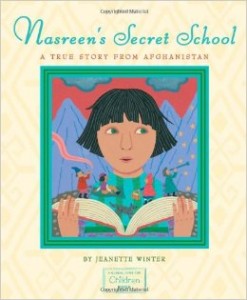 The children’s books in question are The Librarian of Basra and Nasreen’s Secret School, both of which take place in the Middle East and explore issues of free speech and access to information in the region. The first centers on a young woman protecting a library in Iraq during war and is based on a true story. The second focuses on a young girl in Afghanistan, who attends a secret school in order to obtain an education.

Although these books offer young readers a different perspective on oppression and censorship, some parents in the community are concerned that the books are encouraging children to engage with the materials in a religious manner — specifically that the books will encourage children to read the Koran and pray to Mohammad. They have demanded that the books be removed from the third grade curriculum in the district. Some parents started a petition in protest, which was fueled by a viral online campaign. Mary Reilly, a local citizen, sent the following note to a member of the school board:

I have been told that elementary students in the upcoming 2015 -2016 school year will be required to read 2 books, promoting prayer to someone other than God. Nasreen’s Secret School & The Librarian of Basra. You can petition these books by going to DuvalSchools.org, Depts, Consolidated Services, Instructional Material, parent petition. I urge you to do this. If we cannot promote praying to God and Jesus Christ in our public schools, how can we promote reading the Koran and praying to Muhammad?

Superintendent Nikolai Vitti has so far defended the books, saying of Librarian that “The book being set in war time leads children to think about freedom that should not be suppressed during war time: freedom of speech, access to information.” The complaints are misguided, as KRRP points out in their letter:

Neither book is religious — in fact, one of the books says nothing about religion at all — they are set in an area of the world dominated by a religion other than what the complainants practice. Further, the books examine ways in which people overcome cultural oppression and censorship, some of which is fueled by religion in the region. Part of the irony in evaluating the challenges is that the First Amendment not only protects freedom of speech, but also freedom of religion, including Islam.

The school has allowed parents to opt their children out of reading the books, and banning them would not only violate the First Amendment, but also impact other parents’ ability to make decisions about what their own children read. The school board is meeting next week to discuss the issue further, and as KRRP writes, our hope is that board will agree that “Decisions about instructional materials should be based on sound educational grounds, not on some individuals’ agreement or disagreement with the message or content of a particular book.”

You can read the entirety of the KRRP letter below. CBLDF joined American Booksellers for Free Expression, Association of American Publishers, National Council of Teachers of English, Society of Children’s Book Writers and Illustrators, and PEN American Center’s Children’s and Young Adult Book Committee in signing the letter.