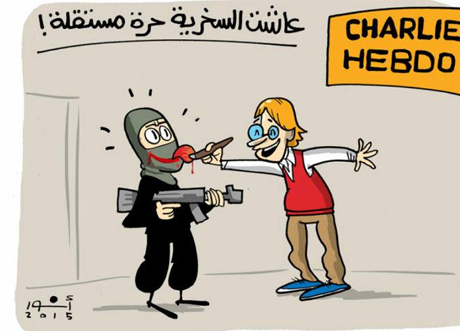 Although international media have widely reported in the past few days that Charlie Hebdo publication director Laurent Sourisseau declared a definitive end to Mohammed cartoons in the satirical magazine, the editorial team clarified today that nothing has changed: They will caricature the prophet as current events warrant, but they are not “obsessed” with doing so.

The misunderstanding arose from an interview in the German magazine Stern, in which Sourisseau (AKA Riss) mused that cartooning is not a command performance, and he feels that Charlie Hebdo is pressured to “exercise a freedom of expression that no one dares to.” Before and after the January attack, during which five cartoonists and seven others lost their lives, the magazine was just as likely to skewer French politicians or the Catholic hierarchy, and Sourisseau reiterated to Stern that “the mistakes you could blame Islam for can be found in other religions.”

Sourisseau’s nuanced remarks from the German interview were quickly distilled and spread through English-language media, which is perhaps a bit quick to pounce on a good “French surrender” story, but it wasn’t until yesterday that they were widely reported in France. Today the French news site Europe 1 added a clarification to its existing report, translated here:

After the publication of this article, the Charlie Hebdo editorial team contacted French media to communicate that Riss’ words had been misinterpreted by the German magazine. Charlie’s publication director ‘never had the intention to stop drawing the character of Mohammed, if the news lends itself,’ but he doesn’t ‘make an obsession of it.’

The cover of the magazine’s latest issue, released today, also demonstrates that it can still gleefully push the envelope regarding terrorism in the news even without a Mohammed caricature. As much of France prepares for its annual month-long vacation, a decapitated but grinning sunbather proclaims from the cover that “ISIS won’t ruin my break!”