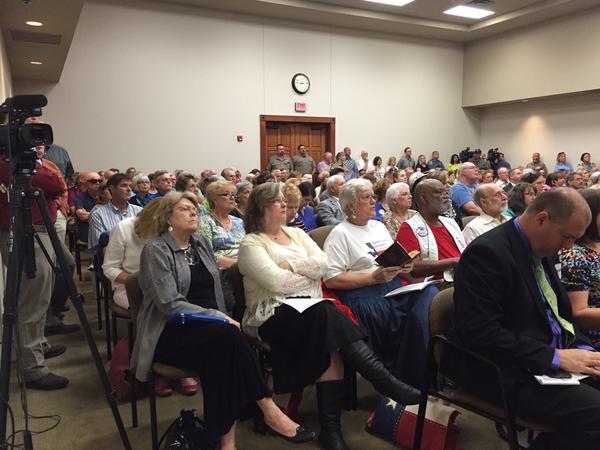 Following a packed community forum where residents of Hood County, Texas spoke both for and against two LGBTQ-themed children’s books in the local public library, county commissioners decided yesterday that My Princess Boy and This Day In June will remain on the shelves.

Library director Courtney Kincaid and the library’s advisory board had already denied requests to remove the books from the collection, but Tuesday’s forum arose after the wife of a state senator sent an email to about 70 people urging them to contact county commissioners in order to “take a stand on these issues such as gay marriage and the indoctrination of LGBT acceptance in our children’s lives.”

As it turned out, though, speakers at the forum were about evenly split between those defending the books and those who wanted them banned or moved out of the children’s section. Journalists John Savage of the Texas Observer and Stella M. Chávez of NPR station KERA live-tweeted much of the action, including anti-censorship statements from a 96-year-old man who described himself as “the most conservative person in the room” and the mother of a gay son who received loud applause from the crowd.

Hood County Attorney Lori Kaspar also spoke at the forum, concurring with the legal assessment presented in Monday’s letter from CBLDF and other members of NCAC’s Kids’ Right to Read Project–namely, that if commissioners forced the removal or relocation of the books it would be “a form of censorship and a violation of the law.” In light of this and the convincing arguments presented by residents, the commissioners decided to leave the books where they are, albeit somewhat grudgingly.

A few of those who spoke against the two books said they now plan to volunteer for the library advisory board. That’s fine, since the board certainly should represent the multiplicity of voices and identities in the local community–as long as they realize this still doesn’t give them leave to impose viewpoint-based access barriers on certain books with which they don’t agree. Congratulations to Kincaid and all those who fought to make sure the books stay where they belong!