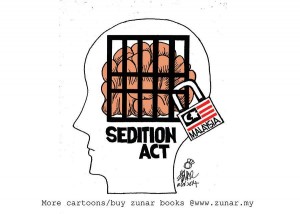 For the second time, Malaysian cartoonist Zunar’s trial on nine counts of sedition has been postponed pending a decision in another case which challenges Malaysia’s entire Sedition Act. Zunar’s trial, which could land him in prison for up to 43 years, is now set to begin on September 9.

The sedition charges stem fromstatements that Zunar made on Twitter in February following the sentencing of opposition leader Anwar Ibrahim on a trumped-up sodomy charge. The cartoonist hinted that the judiciary in that trial had been subject to political pressure or bribery, observing that “the lackeys in black robes are proud of their sentences. The reward from political masters must be plenty.” He then exchanged Twitter barbs–anda cartoon–with Inspector-General of Police Khalid Abu Bakar as officers were en route to arrest him.

The trial delay is due to a legal challenge to the Sedition Act fromlaw professor Azmi Sharom, who is also charged with sedition for a statement that he made to a news outlet. Because Sharom contends that the Act’s restriction on freedom of speech is unconstitutional, his case will be decided by Malaysia’s highest judiciary, the Federal Court. Sharom’s appeal has been pending since November 2014 and no date has been set for the hearing.

Zunar’s case is not the only one delayed for that reason; student activist Adam Adli has appealed a one-year sentence for “questioning the results of the last general election and calling on Malaysians to take to the streets in protest,” but in late June his hearing was delayed for two months due to Sharom’s challenge. Evidently the Malaysian government is in no great hurry to decide Sharom’s case, since it provides a convenient excuse to keep dissenters like Zunar and Adli in legal limbo.