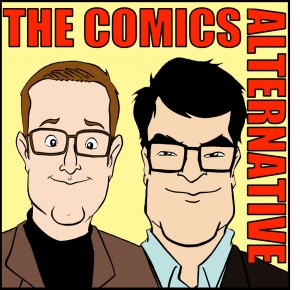 Recently, on a special episode of their Comics Alternative podcast, Andy Wolverton and Derek Royal devoted over an hour to a roundtable discussion on libraries and comics, featuring University of Illinois Library & Information Science professor (and Wertham exposer) Carol Tilley and Texas Tech University humanities librarian Robert G. Weiner. During the wide-ranging talk, the four explored a variety of issues that affect the availability and accessibility of comics in libraries, including labeling, categorization, and censorship.

The conversants brought a high level of expertise to the conversation. Aside from her work proving that Fredric Wertham fabricated data that indelibly stigmatized comics and kept them out of libraries for decades, Tilley has done extensive research on the history of comics readership and librarians’ attitudes towards the format. Weiner maintains an extensive comic collection at Texas Tech and has also written or edited numerous articles and books on the topic, including Graphic Novels and Comics in Libraries and Archives: Essays on Readers, Research, History and Cataloging. Finally, Comics Alternative host Andy Wolverton himself is a public librarian in Anne Arundel County, Maryland, where he is also responsible for collection development in comics and graphic novels.

During the special episode, which listeners can find here or via iTunes or Android podcast apps, Tilley, Weiner, and the two hosts discussed many facets of interest to librarians who deal with comics, including:

[L]abeling and categorization — e.g., Is the term “graphic novel” more advantageous for cataloging? — the challenge of hybridized texts, community outreach and comics, the interaction between the classrooms and libraries, explicit content and censorship, the issue of canon formation, librarians as comics curators, mainstream versus “alternative” comics acquisitions, and the role of librarians as comics educators.

Thanks to The Comics Alternative’s Two Guys for shining a spotlight on some very important issues. Check out their blog here and subscribe to the podcast via your favorite app!

← School Board Stands by Curious Censorship in Florida
Back to School with Comics: CBLDF Banned Books Week Handbook →