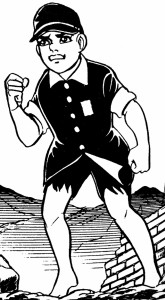 This year marks the 70th anniversary of the dropping of the atomic bomb on the city of Hiroshima, and with this momentous date, Last Gasp associate publisher Colin Turner is using Kickstarter to help deliver 4,000+ copies of Keiji Nakazawa’s classic anti-war manga Barefoot Gen into schools and libraries across the United States.

A survivor of the Hiroshima attack, Nakazawa began producing the semi-autobiographical manga series in 1973. Barefoot Gen captures the harrowing tale of a seven-year-old boy in Hiroshima as he learns to cope with the aftermath of the atomic bombing. Since its initial publication, the book has become internationally renown and has received noteworthy critical acclaim as a work that captures an important moment in international history. Although praised for its significant educational value, the book has also been met with several challenges, including ban attempts in Nakazawa’s home country of Japan.

The book covers very difficult subject matter — subject matter that is probably best accompanied by classroom discussions. To help start that conversation, Last Gasp has put together a Kickstarter campaign to produce a new hardcover edition of the series and to get copies of the series into schools and libraries. “In my experience, middle school students have little understanding of war,” says Nick Glasser, an English teacher at Herbert Hoover Middle school in San Francisco. “Barefoot Gen provides them with more than a historical account; it gives young learners an appreciation of the terrible human cost. It’s little wonder the book has been taught to generations of students throughout Japan. Barefoot Gen is essential reading.”

As Nakazawa himself said, “The work does describe brutal scenes, but children are intrinsically able to get to the essence of the story — that people should live despite the difficulties. We must trust the children and let them read as they want to.”

This graphic novel series has become a staple in classrooms across Japan, but after almost 30 years since its translation into English, it has yet gained as much traction in U.S. classrooms. Last Gasp is looking to increase its availability to American students. As they write:

You can view more about the campaign below and donate online here.