An exhibit at Pittsburgh, Pennsylvania’s ToonSeum, entitled Slinging Satire: Political Cartoons and the First Amendment, poses the question: What does it mean to be a political cartoonist in today’s turbulent global scene and what represents “fair” satire?

Broken into two parts, the first part of the exhibit showcases several political cartoons from award-winning cartoonists that tackle a variety of contemporary issues like global warming, the 2016 presidential campaign, and gay marriage. The second half of the exhibit is a tribute to Charlie Hebdo and the impact that the satire magazine’s controversial work has had on contemporary satire and the meaning of freedom of expression.

“Controversy sparks and fuels the art of political cartooning,” note Sara Duke and Martha Kennedy, who discussed political cartooning in the June issue of Library of Congress Magazine. “Political cartoonists thrive in a climate that allows contention and freedom of expression. The compelling union of image and word that characterizes political cartoons sets them apart from other art forms, endowing them with the potential to inform, provoke and entertain.”

The showcase is more than just a collection of political cartoons, though. It was curated with the goal to encourage conversation about the current state of free speech, satire, and how the role of cartoonist has changed in light of specific events. At the beginning of the exhibit is a plaque noting the intent of the exhibit: “[to] examine free speech from the perspective of the cartoonist while furthering a dialogue about what constitutes ‘fair’ satire.” As Hannah Schwarz writes in the Pittsburgh Post-Gazette, “[The exhibit is] supposed to encourage a nuanced and rare discussion that goes beyond whether a cartoonist or writer can do something to effect change, and touch on the more interesting question of whether they should do something.” 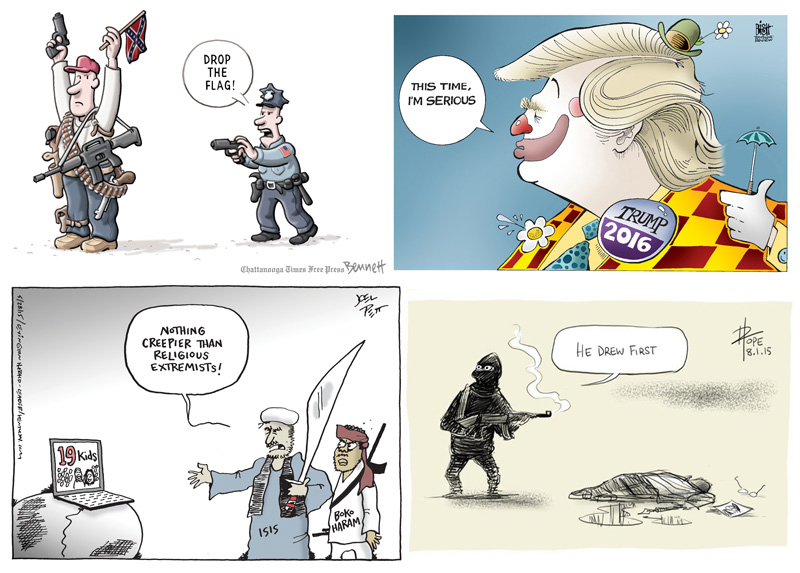 This isn’t the first time that this conversation has come up. In an article published in The Atlantic, controversial political cartoonist Garry Trudeau took on “The Abuse of Satire” and discussed that although one have the right to offend, that doesn’t necessarily mean that they have to. On the other side of the argument, award-winning author, Salman Rushdie, recently commented in an interview with L’Express that in light of recent events like the attack on Charlie Hebdo the world has become too cautious and too afraid of free speech — in effect, the world has “learned the wrong lessons” about what it means to have the ability to express oneself without fear of repercussion.

Regardless of the stance, ToonSeum’s exhibit is designed to bring about these types of conversations. “In the wake of that tragedy, satire is being reexamined,” Rob Rogers, the curator of the exhibit, commented in an editorial for the Post-Gazette. He adds:

Some fear political cartooning and freedom of speech are under threat. Others say cartoonists need to be more sensitive about drawing images that offend certain religions and cultures… One thing is certain. Love them or hate them, political cartoons represent free speech at its most transformative and provocative.

Slinging Satire: Political Cartoons and the First Amendment was curated by Rob Rogers, with help from curator Andrew Farago, cartoonist Jack Ohman, and animator Mark Fiore. ToonSeum (945 Liberty Avenue, Pittsburgh, PA) will have the exhibit up through September 20, 2015. Visit their website for more information.