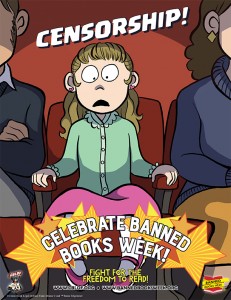 Banned Books Week 2015 is coming up September 27 – October 3. As a sponsor of the annual week celebrating the freedom to read, CBLDF is proud to offer free print resources for libraries, educators, and retailers who want to join the celebration!

First up, we have a poster adapting Raina Telgemeier’s amazing cover for the 2015 edition of the CBLDF Banned Books Week Handbook! We’re also delighted to offer a poster featuring characters from banned and challenged comics courtesy of Jonathan Hill and First Second Books. Finally, we have Jeff Smith’s Bone, waving a flag for the freedom to read!

Feel free to use these great posters in your Banned Books Week displays and to advertise your events celebrating the freedom to read! Click on the links below to download high-res versions of each: 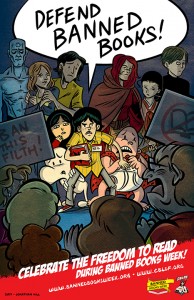 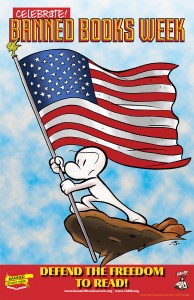 We’re also delighted to offer shelf talkers for stores, libraries, and classrooms! Featuring “Fighting Words” about censorship from some of the biggest names in comics, you can use these shelf talkers to call attention to banned books, as part of your Banned Books Week displays, on bulletin boards, and more! Featuring quotes from Neil Gaiman, Jeff Smith, Marjane Satrapi, Alan Moore, Frank Miller, Alison Bechdel, and Ariel Schrag, this who’s who of challenged creators will inspire your Banned Books Week celebration!

We have two formats: An 11″ by 17″ spread that features all of the quotes or a version that you can cut apart into individual blurbs to customize your shelves and displays. Click on the links below to dowload high-res versions of each: 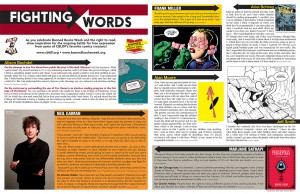