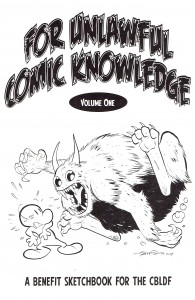 Between 2006 – 2007, Comic Book Legal Defense Fund gathered original sketches from comics superstars and bound them together in one collection: For Unlawful Comic Knowledge. Within these pages are original pieces by Geoff Darrow, Rick Veitch, Ryan Ottley, Cully Hamner, Robbi Rodriguez, Erik Larsen, Jill Thompson, Paul Azaceta, and Jason Latour, all drawn in support of CBLDF’s fight for the right to read!

Nearly a decade later, these Sketchbooks are considered a collector’s item and will never be reprinted. CBLDF has gathered together the last copies available and is now offering them paired with the original sketches in our Unlawful Live Auction Collection.

Now you can see how your favorite artist developed their skills with pieces like this Daredevil drawing from Paul Azaceta, who is now the artist behind Robert Kirkman’s Outcast and who was working on the artwork for Mark Waid’s series Potter’s Field when For Unlawful Comic Knowledge was published.

Many of the drawings in For Unlawful Comic Knowledge come from long time CBLDF supporters, such as Star Trek series artist Tony Shasteen. Shasteen also covered the Star Trek / Green Lantern #1 CBLDF Exclusive Variant, and he designed our Bill Gaines Was Right! t-shirt.

Also contained in the pages of For Unlawful Comic Knowledge is a treat from superstar comics writer Brian Azzarello, who pens his own character for fans looking for an extra-special original sketch to take home.

Order now and receive your sketchbook in time for New York City Comic Con, because not only does For Unlawful Comic Knowledge contain reproductions of work from famed comic creators, but it also includes five pages of blank sketch areas for you to customize with commissions from your favorite artists!

Comic Book Legal Defense Fund spreads awareness of censorship by releasing CBLDF Publications to supporters, schools, and libraries, and taking direct action to fight attempts to ban books around the nation. This work is possible because of the contributions of supporters like you, so please bid generously to support our continuing fight!