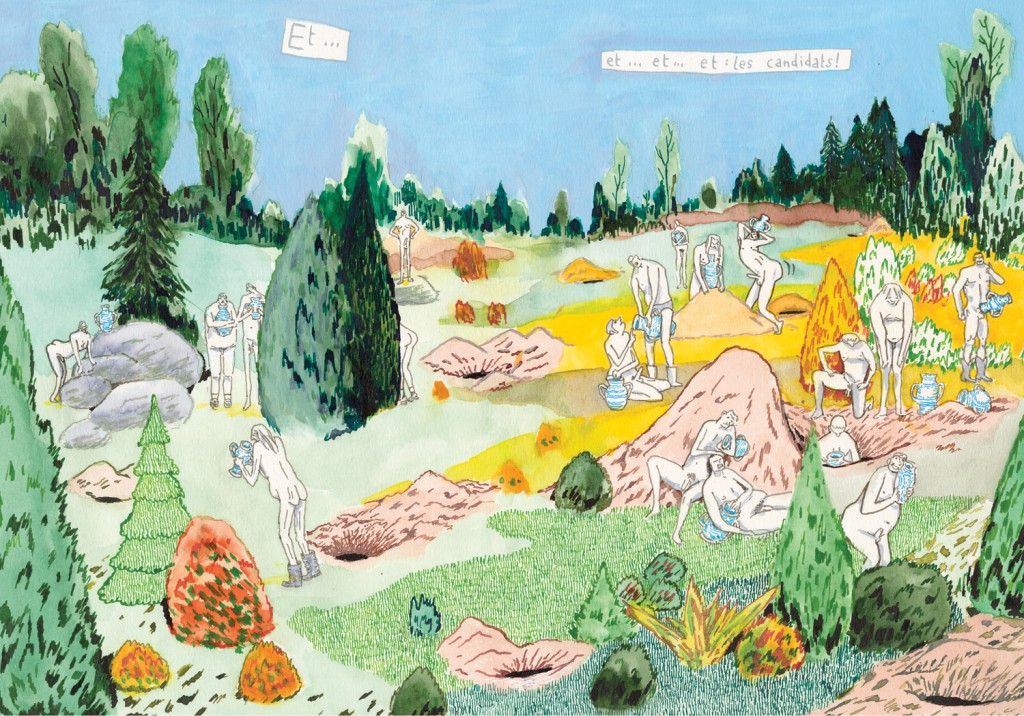 Sequential artists Dominique Goblet and Kai Pfeiffer are scratching their heads in bewilderment after an exhibition of their work in St. Petersburg, Russia was shut down, even after they agreed to censor it for nudity. The exhibit was part of the annual citywide Boomfest comics festival, but the removal may have had something to do with the particular venue which was hosting Goblet and Pfeiffer’s work: the Nabokov House Museum, which has been the target of threats and attacks from extremists in the past.

Goblet and Pfeiffer, from Belgium and Germany respectively, are collaborating on an ongoing project which has been partially published in book form as Plus si entente. According to the Boomfest website, the work “describes the life of a divorced woman who spends time on a dating site, publishes information about herself and reads the ads men have published. It is a romantic comedy about domination, control, loss, love and desire.” Many of the drawings feature non-sexualized nudity, as in the image shown here depicting the protagonist’s fantasy of men “crying and hoping for her to pick them like flowers.”

Even before the exhibit opened on September 25, Goblet said, the Nabokov Museum director asked the artists to conceal the nudity in their work–a request they found bemusing in light of the numerous classical and modern nudes found just blocks away in the world-class Hermitage Museum. Eventually the duo assented, but chose to make the cover-ups as conspicuous as possible: an assortment of black dots, censor boxes, grape leaves, and “bright pink and orange panties.” Whether due to the cheekiness of the concession or some other reason, museum staff packed up the exhibit and called Boomfest director Dmitry Yakovlev to retrieve it on September 30, ten days before the end of its scheduled run.

The Nabokov Museum, housed in the birthplace and childhood home of the Lolita author, is owned by St. Petersburg State University. In January 2013 the building was attacked by a vandal who broke a window with a bottle containing a note that read, “How can you remain unafraid of God’s wrath promoting Nabokov’s pedophilia?” A few weeks later, the word “pedophile” was also spray-painted on an exterior wall. Around the same time, the museum’s director also reported receiving numerous emails from “unknown angry residents” regarding Nabokov. The pedophilia allegations, of course, should be directed against his literary creation Humbert Humbert rather than against the author himself, but it seems this history of vandalism and threats may explain the museum staff’s hypervigilance.

Even if that is the case, Goblet and Pfeiffer maintain that “pre-emptively bowing to the demands of extremists is essentially saying ‘the extremists are right.’” They also realized after the fact that one close-up drawing of two men lounging (and crying) in the buff may have been interpreted as homoerotic and thus against the law in Russia. The characters “weren’t gay before,” Pfeiffer said wryly, “but now they might be.”

← Farghadani Subjected to Virginity Test in Investigation of “Illegitimate Relations”
Cartoonists On The Front Lines: The Economist Cartoonist on Free Expression in Turkey →